Cornell's Ithaca campus and its iconic upstate setting may be what many envision when they think of the university, but Cornell has long had a presence on the cosmopolitan stages of New York City... This is an excerpt of an article that first appeared in EZRA Magazine. Read the full story here. 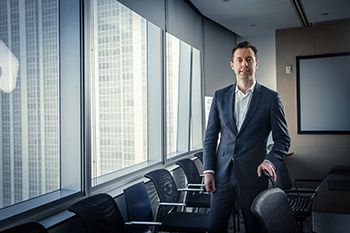 "We're taking a precision medicine approach," he says of the research that involves a large team across several institutions, including clinicians at Weill Cornell Medicine's Caryl and Israel Englander Institute for Precision Medicine, biomedical engineers at Cornell Ithaca, metabolomics experts at Weill Cornell Medicine-Qatar in Doha, and scientists at the Cornell Tech campus. "It's an attempt to improve how we deliver health care by trying hard to understand the molecular roots of each patient's disease and making a multitude of measurements that predict and help identify the best treatment options for each patient."

Elemento works closely with the affiliated hospital, NewYork-Presbyterian/Weill Cornell Medical Center, which provides patient data and samples. Sometimes his team can return treatment recommendations in as little as a week, but building the model on which they are based takes years – and massive amounts of data.

Much of this information stems from high-throughput sequencing, which delivers the makeup of an entire genome in just a couple of days.

"That's a really critical technology that allows us to peer down to the cells and understand what's driving them," says Elemento, who also is the Walter B. Wriston Research Scholar.

Sequencing can help to match mutations in the DNA of cancerous cells to specific treatments and analyze cell RNA to see what genes are expressed in a tumor. It is also being used to monitor patient immune systems in an effort to predict and increase the currently small number of patients who respond to immunotherapy, a new form of cancer treatment that activates the immune system itself to find and kill tumor cells.

Elemento's approach to precision medicine relies heavily on high-performance supercomputing to process these large amounts of data. "But it's only one component," he explains, "because then you have to build predictive models. That's where artificial intelligence (AI) becomes critical."

In this case, AI consists of computer programs sifting through the data to forecast which treatments will be effective in a given patient, based on his or her individual combination of measurements of genetic, physiological and environmental factors. AI also can be used to predict whether or not a patient requires urgent treatment – for example, based on the expression of certain genes, whether a thyroid nodule is likely to be cancerous or benign.

While Elemento estimates the number of patients who have been treated by these methods number fewer than 100, that total is growing quickly, he says: "But even if we help prolong the life of only one patient, it's amazing."