When Billy Beane wanted to turn around the Oakland Athletics on a meager budget, he took an unconventional approach, relying on overlooked analytics to assess player performance and field a team that could better compete against his richer Major League competitors. 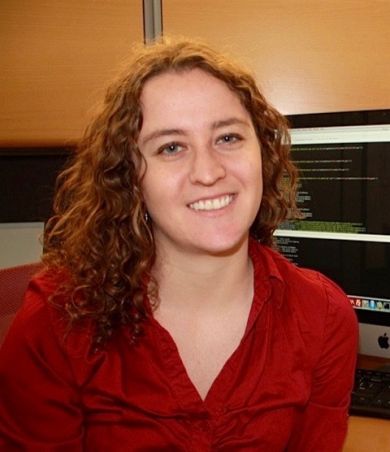 Kaitlyn Gayvert Kaitlyn Gayvert, a Ph.D. student in the lab of associate professor Olivier Elemento, Ph.D., is applying her own “Moneyball” approach to cancer.

She has developed a computational model to better screen for drugs that are too toxic to tolerate, in the hope that it will improve clinical trial outcomes and streamline the long, expensive drug development process.

In the case of drug development, the standard screening for compounds to be submitted for Phase I clinical trials has been “Lipinski’s Rule of Five,” which describes molecular properties important for a drug's pharmacokinetics in the human body, including their absorption, distribution, metabolism and excretion.

The method relies solely on chemical features of compounds, and is insufficient at distinguishing toxic drugs from safe ones, Gayvert argues, pointing to an alarming rise of clinical trial failures, as drug companies remove more compounds from the pipeline at all levels of testing than ever before, often due to toxicity.

“We suggest that existing approaches overlook important information, such as the drug’s target, which is also highly relevant to the drug-related toxicity,” Gayvert said.

For example, many chemotherapy drugs have high toxicity because they are targeting genes or pathways that are active throughout the body. A drug that acts upon a gene that is being expressed in only one organ would likely be much less toxic.

In addition to the structural characteristics considered for Lipinski’s Rule of Five, PrOCTOR also takes into account target features, such as tissue-specific expression, network connectivity and mutation load/frequency.

Gayvert tested the model by plugging in data about drugs with known toxicities and seeing how her results compared.

“The model had significant predictive performance,” she said. “Severe side effect frequency, such as pleural effusion (fluid around the lung) and neutropenia (low white blood cell count) correlated with PrOCTOR score.”

Among the drugs that her method predicted most likely to fail a clinical trial due to toxicity was Rosiglitazone, a diabetes drug that actually made it through clinical trials and was approved for use in the U.S. This was a surprise – until Gayvert did some investigation and learned that the drug has recently been pulled from markets in the U.K., South Africa, and New Zealand for safety concerns.

“We may have been able to catch that, where no other method could,” Gayvert said.

She is hoping to add the ability to home in on specific types of toxicity, such as drug-induced liver injury. She has already used the tool to identify 20 drugs not annotated to have liver toxicity problems that had adverse reports.

Gayvert has also used the model to examine which features of drugs might help avert toxicity, and she would like to more fully develop the interpretive aspect of her tool to inform potential alternatives.

“For drugs that fail, we’d like to be able to explain why,” Gayvert said.

Gayvert, a Rochester native who joined the Tri-Institutional Computational Biology and Medicine Program (a collaboration between Weill Cornell Medicine, Cornell University and Memorial Sloan Kettering) in 2012, said she was inspired to develop the tool a year ago, after running into roadblocks during another project.

While working with Himisha Beltran, M.D, Mark Rubin, M.D. and David Rickman, Ph.D., to identify targets for novel antibody therapeutics and minimize toxicity in neuroendocrine prostate cancer, Gayvert felt limited by the existing data sets and began to create her own model.

Gayvert has already presented the PrOCTOR work in several scientific venues, including the International Conference on Molecular Targets and Cancer Therapeutics and the New York Academy of Sciences Phenotypic and Biomarker-Based Drug Discovery Symposium, where she won the F1000 Poster Prize.

Previous work presented at the Annual Meeting of the American Association for Cancer Research in 2014 was also well received. In collaboration with Dr. Rickman, Gayvert was able to predict a drug for use in targeting a previously “undruggable” transcription factor. Using a computational approach to integrate genomewide binding data (ChIP-seq) with drug perturbation differential gene expression profiles, they discovered that a steroid drug used to treat inflammation, dexamethasone, worked in a roundabout way to disturb ERG, a pro-invasive, oncogenic transcription factor over-expressed in as many as 50 percent of prostate cancer patients.

Gayvert was recently named to the Forbes “30 Under 30” list of influential young scientists in healthcare, along with her Elemento Lab colleague Neel S. Madhukar, who developed his own computational tool to predict drug targets and identify new anticancer compounds.