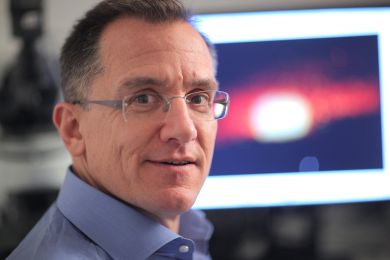 Dr Mark Rubin Combining genetic information from a patient’s tumor cells with three-dimensional cell cultures grown from these tumors and rapidly screening approved drugs can identify the best treatment approaches in patients for whom multiple therapies have failed, according to a new study led by Weill Cornell Medicine investigators.

Published March 22 in Cancer Discovery, the study brings researchers one step closer to fulfilling the promise of precision medicine, which aims to provide targeted, individualized treatment based on each patient’s genetic profile.

“Our goal is to use precision medicine to improve the way clinicians think about cancer therapies as opposed to selecting a therapy that may not be fitted to that patient’s cancer,” said senior author Dr. Mark Rubin, director of the Englander Institute for Precision Medicine and the Homer T. Hirst III Professor of Oncology in Pathology at Weill Cornell Medicine, and director of the joint precision medicine program at Weill Cornell Medicine and NewYork-Presbyterian/Weill Cornell Medical Center. “Combining genome sequencing with rapid drug screening enables us to nominate new therapies for patients, which we could not have predicted from the genomics alone.”

Cancer genetics research has made great strides in the last 20 years, allowing investigators to now identify mutations in tumor cells that are susceptible to treatment. Still, a significant number of cases remain in which genetic mutations cannot indicate to clinicians exactly what drug will be effective in treating a patient’s disease, particularly for those with advanced cancers that have failed multiple therapies.

To better treat these patients, Dr. Rubin and the research team — including co-first authors Dr. Chantal Pauli, a former research fellow in Dr. Rubin’s lab, and Dr. Benjamin Hopkins, a postdoctoral associate in co-author Dr. Lewis C. Cantley’s lab — developed an approach in which tumor cells taken from patients are grown into three-dimensional cell cultures called tumor-derived organoids. The researchers can then test more than 120 U.S. Food and Drug Administration-approved cancer drugs against the organoids to determine which drugs show the most promise. After identifying a potential treatment, they transplant the organoid into a mouse to assess how well the tumor responds to the drug. The organoid cell culture system, Dr. Rubin said, markedly accelerates the identification of potential therapies compared with current approaches, which depend on growing tumor cells in mice.

“With the organoid system, we can obtain answers in one to two months, compared to six months to a year with mice,” Dr. Rubin said. “This is critically important for patients with advanced cancer. We need to strive to identify new and more effective therapies in a timely manner.”

“Dramatic improvements in the ability to grow tumors as organoids outside the body is bringing precision medicine to the next level of precision,” added Dr. Cantley, the Meyer Director of the Sandra and Edward Meyer Cancer Center at Weill Cornell Medicine. “It is now possible to grow a wide variety of tumors outside of the body; this allows the precision medicine team to not only obtain full exome and RNA sequencing data, but also test a panel of approved drugs on the same tumor that is growing in the patient.  Importantly, this can occur within a time scale that would allow one to make a clinical decision about the next therapy, should the tumor progress on standard of care.

“This approach could revolutionize how cancers are treated in the future,” he said, “by providing oncologists with detailed information about the genetic aberrations, the gene expression profiles and the response to drugs of the same tumor that is growing in the patient.”

For the study, researchers analyzed tumor-derived cells from four patients who came to the Englander Institute for care. Two of the patients had different forms of uterine cancer, while the other two had different forms of colon cancer. The scientists identified effective drugs and drug combinations — many of which are medications approved for treating other cancers — that they subsequently validated using organoid cultures and organoids transplanted into mice.

“At the moment, there is no standard to guide a clinician’s decision of when to give a patient a drug that’s not recommended by the FDA,” Dr. Rubin said. “With this study, we’re trying to establish a standard that uses a patient’s cells to answer that question.”

This study was supported in part by the National Institutes of Health, the Starr Cancer Consortium and the Prostate Cancer Foundation.