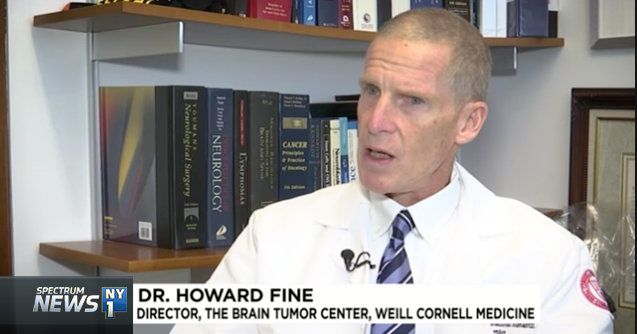 It's a page right out of a science fiction novel - human brains being grown on Petri dishes, except it's real life, happening right here in the city. Health Reporter Erin Billups explains it's all in an effort to defeat one of the most deadly cancers around, in this video from NY1.

News that Arizona Senator John McCain had brain cancer hit Washington hard last month. With few advancements in treatment over the past 30 years, others with glioblastoma tumors rarely lived past 15 months of diagnosis.

"When I first started out in this field three decades ago the average survival of a patient with glioblastoma was in the range of 12 months and now it's in the range of about 15 months. So in three decades we've gained about three months, and obviously that's far from optimal," said Dr. Howard Fine, Director of the Brain Tumor Center at Weill Cornell Medicine and New York-Presbyterian.

Dr. Fine says unlike with other cancers, you cannot remove the organ. The brain, he says, is exquisitely sensitive.

Glioblastomas are embedded in the brain, making them hard to fully remove. Radiation or chemotherapy is ineffective because of the blood brain barrier - a function of blood vessels in the brain - structured to block out toxins or drugs.

"We came up with this kind of crazy notion a few years ago, that wouldn't it be great if we could model individual patient's brain tumors, by growing a replica of a patient's own brain, in a Petri dish, with their own tumor, growing in their own brain?" Fine said.

It turns out it wasn't so crazy. Using technology developed by scientists in Japan they did just that, tricking embryonic stem cells to create mini-brains.

"That mini-brain now has all your own genetics. We're recreating a fetal version of your own brain," Fine said.

Fine and his team took patients' tumor cells and placed them in Petri dishes with patients' mini-brains.

Next, researchers tried different drugs on the mini-brain tumors, with the goal of more accurately finding treatments for individual patients.

They've seen success neutralizing tumors in the Petri dish, but clinical trials with patients are still two years out.

"The one thing I know about this disease, is we can't keep doing the same thing. Until our patients are cured of this disease, I'm not satisfied," Fine said.