Rohan Ramakrishna, M.D. The personal computer had not yet been invented when Rohan Ramakrishna was born in 1980, but in the intervening decades his life has mirrored the technological revolution. As innovative products were developed and released at mind-boggling speed, Ramakrishna was growing up in Pennsylvania, where his fascination for science and technology was cultivated. Now a neurosurgeon at the Weill Cornell Medicine Brain and Spine Center, Ramakrishna's curiosity drives him to be a leader in learning and using new neurosurgical technologies that are saving patient lives.

“The world of neurosurgery is changing so fast,” said Dr. Ramakrishna, 36. “There are amazing new tools available to help patients achieve their oncologic goals. It’s such a pivotal time to be a neurosurgeon and to participate in all of the positive changes that allow patients the chance to live better lives after what can be devastating illnesses.”

Dr. Ramakrishna pushed the boundaries of neurosurgical technology recently by using a system that helped access, retrieve, collect and preserve tissue from a deep, malignant brain tumor in an effort to provide a new treatment direction when standard therapies failed and the disease progressed.

“The behavior of this particular tumor was very unusual,” said Dr. Ramakrishna. “It was an anaplastic oligodendroglioma, which can respond well to standard cytotoxic therapies and adjuvant radiation based on recent trial data. Unfortunately these treatments had failed in this patient, and her disease progressed very rapidly. We knew we needed more information – we needed a way to sample that new tumor to find out what was going on. Otherwise we’d be choosing her next course of treatment blindly – basically guessing which chemotherapy might work for her.”

On the right path

Working with the patient’s neuro-oncology team, Dr. Ramakrishna developed a plan for obtaining a sample of the new tumor — a pristine sample that could undergo genetic sequencing at the Englander Institute for Precision Medicine, where experts could match that tumor to a treatment more likely to be effective against fighting it. The deep location of the tumor would make it a challenge to reach without causing irreparable harm to healthy tissue around it.

“I had previously used this new technology on deep tumors, so I was confident would work,” said Dr. Ramakrishna. “This technology uses a precisely engineered introducer that looks kind of like the Washington Monument. It’s unique in that it doesn’t cut a hole through brain tissue, but rather gently displaces tissue as it is moved through the delicate folds of healthy brain. It allows me to reach a deep tumor without causing damage that would lead to neurologic deficits post surgery.” 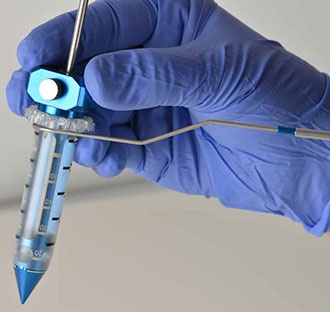 The Brain Path introducer, with a tip designed to nudge brain tissue aside rather than cut into it. Credit: Nico Corporation Dr. Ramakrishna had recently used this new technology, called BrainPath, on a woman who developed three brain tumors a decade after successful treatment for breast cancer. Her doctors told her there was no hope for recovery and recommended palliative whole-brain radiation followed by hospice care. The patient sought a second opinion from Dr. Ramakrishna and told him she wanted to be aggressive in fighting her new cancer.

BrainPath technology allowed Dr. Ramakrishna to remove the largest of the three tumors surgically, with a plan to have targeted radiation to the tumor cavity and the two other small tumors. This plan would  not only spare the patient from negative cognitive effects resulting from whole-brain radiotherapy, but it also gave her the option of alternative chemotherapies or even clinical trials that she may have otherwise been ineligible for.

“The surgery went extremely well, and post-operative MRI scans showed that the largest tumor had been completely removed,” Dr. Ramakrishna said. “Best of all, the patient showed no unexpected neurological deficits from the surgery.”

Based on his experience with this new tool, Dr. Ramakrishna and the neuro-oncology team decided to use it to get a sample of the oligodendroglioma tissue. The procedure was a success, and the patient now has evidence-based options for future treatment.

“I work with many patients that have difficult, advanced, or inoperable tumors,” said Dr. Ramakrishna. “Just a few years ago, they would have been considered hopeless. Today, we have such an amazing toolkit of advanced technologies that allow us to choose treatments rationally based on the precise makeup of a patient’s individual tumor. More importantly though, these new technologies and therapies have been designed with quality of life as a primary focus, and to me that’s an essential part of designing precision oncology plans for our patients. “

This story first appeared on the Weill Cornell Brain and Spine Center site. Read the original - and learn more about the program - here.

It doesn’t take a warrior to beat cancer. It takes a treatment that works.

All the Colors of the Rainbow