For those hoping to fire a parting shot at their cancer, the Englander Institute of Precision Medicine (EIPM) has a unique opportunity.

Patients enrolled in precision medicine clinical trials at Weill Cornell Medicine/NewYork-Presbyterian can also consent to have their cases studied after their death.

The lasting legacy is the ultimate way to advance our understanding of cancer biology and contribute to future cures, says neuropathologist David J Pisapia, M.D. 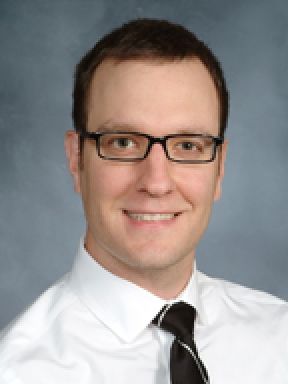 David J Pisapia, M.D. “It enables researchers to capture data at a state of disease progression that is rarely studied,” Pisapia said.

By analyzing these samples and comparing them to samples collected earlier in the patient’s disease, scientists can better understand how the cancer changed, spread and responded to treatment.

According to a paper Pisapia and colleagues published in JCO Precision Oncology, a journal from the American Society of Clinical Oncology (ASCO), significant scientific findings have already been made thanks to those who have participated in the Englander Institute’s “rapid autopsy” program.

Information gleaned from two patients yielded insights into chemotherapy-resistant bladder cancer that has led to an important Nature Genetics paper and the identification of potential targets for new treatments to help other patients with similar mutations. Samples from another patient led to a discovery about a novel gene fusion mutation which could also lead to a new drug for castrate-resistant prostate cancer.

By tracing the spread of other patients’ cancers, researchers were able to identify points in the evolution of tumors that might hold the key to metastasis and treatment resistance – information that could be used to halt both issues in future.

For one 50-year-old patient, the mystery of where his metastatic disease originated was finally solved thanks to his EIPM autopsy. After analyzing samples from 15 locations across his body – including adrenal gland, lung, liver, gallbladder, pancreas, intestines and lymph nodes --  pathologists were able to determine that the primary disease was a malignant melanoma and molecular analysis at EIPM yielded a candidate mediator of metastatic spread to the lungs.

Another invaluable resource gathered during the process is the collection of rare materials, such as tissues from inoperable tumors. One pediatric patient’s life was lost much too soon, but samples collected from his brain tumor will live on as cell cultures that can be used in the lab to better understand his rare disease and to test drugs to cure it. Other tumor tissues were successfully transplanted into mice or made into organoids, the latest in vitro model breakthrough that allows scientists to closely mimic human biologic processes in three dimensions.

The JCO Precision Oncology study traces the first 15 patients to participate in the EIPM autopsy program. Of the more than 550 patients participating in EIPM clinical trials, around 125 consented for rapid autopsies, so called because they ideally happen within hours of a patient’s death, before the tissue and its genetic material begins to degrade. A total of 346 tissue samples were procured; whole exome sequencing was performed on 113 of them, and RNA sequencing was performed on 72 samples.

Unique to other autopsy programs, the EIPM program had the benefit of access to prior samples from all of the patients, and to samples of the tumor at diagnosis for 12 of the 15 patients in the study. This provided unprecedented insight into the evolution of the disease.

“By discovering how tumors affect organs and the parts of the body they invade on the cellular level, we can provide valuable information for the early detection, treatment and, in some cases, prevention of certain metastatic diseases,” Pisapia said.

Juan Miguel Mosquera Juan Miguel Mosquera, M.D., the senior, corresponding author on the study, said the team has also been collecting tissues for new research efforts, including collaborations that involve the application of novel sequencing techniques and investigation of the role of exosomes and the microenviroment in the formation of “niche areas” where tumors may be more likely to form.

As the diversity of job titles of the 32 the study’s co-authors suggests, the EIPM autopsy program is a huge team effort, with pathologists collaborating closely with data scientists, oncologists and surgeons.

Olivier Elemento, Ph.D., acting director of the Englander Institute and another co-author on the paper, said the rapid autopsy program represents an important part of the institute’s mission.

“The goal of the Caryl and Israel Englander Institute for Precision Medicine is to harness as much information as possible from an individual patient’s tumor tissue not only in an effort to benefit the patient during life, but also to develop preclinical platforms and co-clinical trials with the potential to benefit larger populations,” Elemento said. “A next-generation sequencing-based autopsy program in conjunction with a pre-mortem precision medicine pipeline for diverse tumors affords a valuable window into clonal evolution, metastasis, and alternations underlying treatment.” 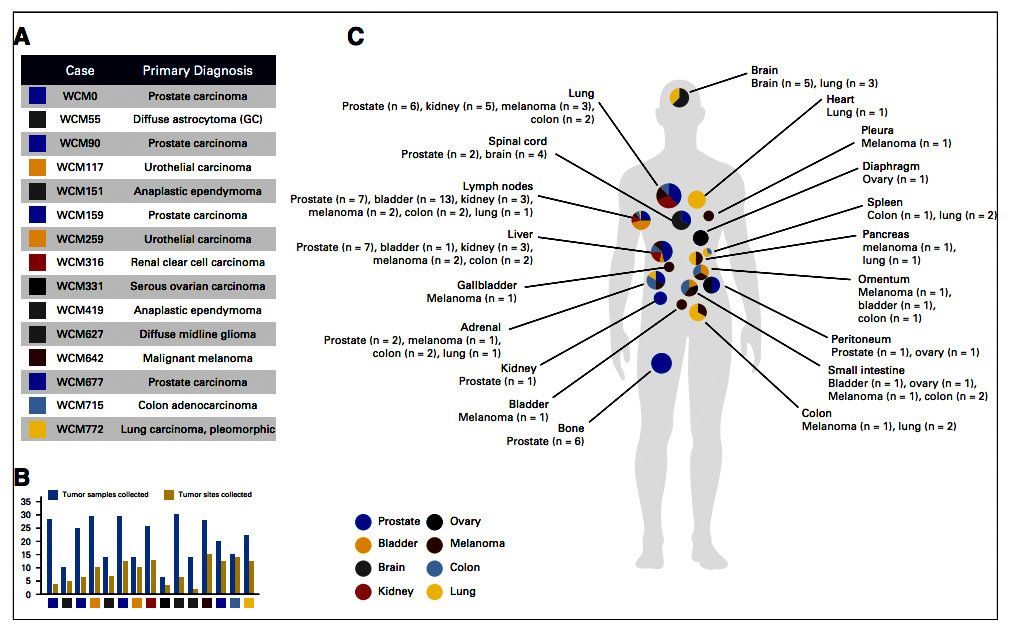 Rapid autopsies of Weill Cornell Medicine (WCM) study cohort. (A) The list of 15 autopsies shows the research identifier (WCM number) and primary diagnosis. (B) Bar chart showing the total number of frozen tumor samples collected and the number of distinctly annotated anatomic sites from which tumor was obtained for each autopsy. (C) Schematic illustration of anatomic sites of metastatic samples that were collected at autopsy. The pie charts represent the breakdown with respect to primary tumor origin, which correspond to the color key on the left side. GC, gliomatosis cerebri pattern of glioma infiltration.