Desperate for a few nights’ reprieve from the constant crying related to their babies’ gastric reflux, parents flocked to fill prescriptions for Propulsid. But the purple pills, designed to combat nighttime heartburn, had an unexpected side effect that hit infants especially hard: cardiac arrhythmia. The drug was taken off the market in 2000, after seven years and a suspected 302 deaths, many of them children.

The Ph.D. candidate at Weill Cornell Medicine has created a computational tool to predict how people’s livers, hearts and other tissues might respond to different drugs, hoping to spot potentially dangerous side effects before the drugs are tested in people.

“With the emergence of precision medicine, there has been a surge of interest in creating drugs for specific protein targets. However, we lack accurate ways to connect drug targets and mechanisms to specific side effects,” Gayvert said. “The tool we have developed could really help guide drug design and bring safer drugs to the market quicker.” 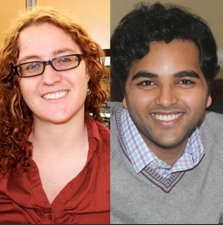 Katie Gayvert and Neel Madhukar To create the MAESTER tool, Gayvert and fellow Elemento Lab members Neel Madhukar and Coryander Gilvary, mined drug side effect databases and scoured safety warning labels. They added their existing knowledge about toxic drugs and ‘toxic targets’ (proteins that are only targeted by drugs with known tissue toxicity issues). They interrogated this data to learn a bit more about the relationship between drug-target-toxicity; they then leveraged this information to draw insights into unexpected drug toxicity events.

To do this, they drew upon two models they had previously developed in the lab: BANDIT, a drug target prediction tool, and PrOCTOR, a toxicity prediction method.

There are an estimated 20-30 million small molecules, including many natural products, but we only understand the workings of less than 0.01 percent. Identifying their targets has been a major challenge, driven by case specific experimentation - a slow and failure-prone process. BANDIT automates this process, and has been used to successfully predict the biological target for many drugs.

By using BANDIT to more closely home in on drug targets, they were able to better link drugs with specific types of tissue toxicity, such as kidney damage, with targets that had not previously been identified as ‘toxic targets.’

“We correctly classified five times as many side effects as would have been expected by random chance,” Gayvert said.

She then built a set of machine-learning models that would integrate drug targets with tissue-wide expression patterns and gene specific features to predict specific side effects for a given drug, and tested it on a series of drugs with known side effects to see how it performed.

“In predicting drug-induced liver injury, it had around 70 percent accuracy at pinpointing specific drugs known to cause that side effect,” Gayvert said. “It also predicted eight drugs that were initially approved by the FDA but pulled from the shelves because of adverse side effects, including Propulsid.”

Having such information early in the drug development process could save millions of dollars, years of work – and lives. The information would also be valuable when designing clinical trials. If a slight risk of pancreatitis were identified, for instance, diabetic patients might be precluded from trial participation, Gayvert said.

“There are adverse side effects that don’t show up in animal studies, or in enough people during trials to raise a red flag. Or they turn up later, many years after the drug has already been approved,” Gayvert said.

A fuller understanding of drug targets and a more comprehensive picture of potential side effects would benefit all consumers, she added.

“When doctors prescribe medication, they want to be aware of all potential adverse reactions, so they know what to watch for, or whether to consider other options,” Gayvert said.

Gayvert will be presenting her research at the Annual Meeting of the American Association for Cancer Research in Washington DC on April 2.