Reader's Digest worked with Stand Up To Cancer to interview America's top scientists about the incredible progress they're making against the disease, including Meyer director Lewis Cantley, Ph.D. This is an excerpt of the article - read the full story here.

Please make this simple change to your diet 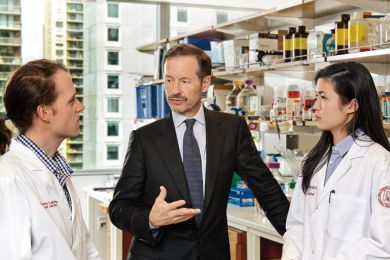 Dr Lewis Cantley in his lab
If you’re overweight or diabetic, you’re much more likely to get dangerous cancers. Many researchers believe that eating too much sugar and rapid-release carbohydrates is particularly dangerous. “Sugar makes your insulin levels spike, and insulin activates P13K, an enzyme that we have learned is a major player in many human cancers,” says Lewis Cantley, Ph.D., director of Weill Cornell’s Meyer Cancer Center in New York, New York. “The evidence is strong enough that I try to avoid processed foods, especially those with added sugars.” Make more room in your diet for these cancer-fighting foods.

Remember, if you’re in the “placebo” group, you won’t be taking sugar pills, says Dr. Cantley. Instead, you’ll get “the standard of care,” that is, the same treatment you would get if you didn’t enroll in the trial. If you’re not in the placebo group, you get the standard treatment plus whatever compound we’re testing. And when we find that a therapy is particularly effective, we often transition the trial to a “crossover” study, which allows every patient to receive the study drug.

Seek out a cancer center

This is especially important if you’ve been diagnosed with a late-stage or incurable cancer.  So much is changing so fast that it’s important to have access to the latest technologies, treatments, trials and medicines, and cancer centers are where you can find those things, says Dr. Cantley. Look for an institution that has a lot of experience with your specific type of cancer or, even better, one that has published research on it.