The enemy approaches. Scouts pick up the scent and send signals to the relay team. The troops are rallied and an attack is prepared, strategically aligned to the specific weaknesses of the foe.

So it is with the body’s immune system. The scouts are T-cells, which pick up the antigen ‘scent’ of foreign invaders and notify their B-cell brethren to shift forms into plasma cells and produce weapons – antibodies – to attack.

Most of the B-cells respond by rapidly producing plasma cells, but this first line of defense is often weak. Luckily, a select few form into a special forces unit: the germinal center. Germinal centers are balls of furiously dividing B-cells that are mutating in order to tailor their antibody genes to attack offending antigens. The result is a much more powerful immunological army, with high affinity antibodies that can fully get rid of the antigen.

Once the job is done, the special forces unit is disbanded, the rapid proliferation and mutations end, and the germinal center cells are reprogrammed into normal plasma cells. 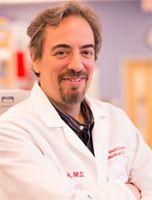 Ari Melnick, M.D. Exactly how this shapeshifting process happens has been a mystery – until now. A team of researchers at Weill Cornell Medicine, led by Gebroe Family Professor of Hematology and Oncology Ari Melnick, M.D., has uncovered the mechanisms by which B-cells transform, and found that it requires a special cooperation between regulatory protein EZH2 and transcription protein BCL6.

“The transition from a resting mature B-cell to a germinal center B-cell is nothing short of astonishing, as these cells are radically different from each other and this dramatic change requires extensive epigenetic reprogramming, or loading completely different software into the B-cell hardware,” Melnick said.

The discovery is key to understanding how certain blood cancers, such as the fast-growing diffuse large B-cell lymphoma, form and evolve. And it may have an impact on a potential new therapy.

“The basic properties of germinal center B-cells is to proliferate and mutate. Hence, they are prone to becoming lymphomas if something stops them from unloading the germinal center software,” Melnick said.

Scientists have long debated which regulatory system was responsible for B-cell programming.

BCL6 is a master regulator protein that attaches to the genome at sites that are crucial for the development of germinal centers.

Both EZH2 and BCL6 are known to repress transcription, the first step of gene expression, in which a particular segment of DNA is copied into RNA (mRNA).

In a study published August 8 in Cancer Cell, Melnick and first author Wendy Beguelin, Ph.D., show that neither alone is responsible – rather, the two form separate but nearby attachment points to the genome to capture a molecular machine called “BCOR complex” which then carries out the actual work of shutting down regions of the genome.

Just as the Air Force requires two officers to simultaneously punch in personal codes and insert and turn individual keys in order to launch dangerous missiles, the immune system seems to require two biochemical keys to shapeshift a friendly B-cell into a freakazoid germinal center B-cell capable of causing lymphomas.

“We show that the ‘missile’ that causes the final effect of controlling B-cell genes is the BCOR complex, which requires the EZH2 and BCL6 key to launch,” Melnick said. Lymphomas occur when these keys get “stuck” due to mutations or other influences.

“Although it may seem a subtle point it is actually quite profound,” Melnick added. “This is the first time it has been shown that such combinatorial repressive mechanisms exist between these kinds of regulatory proteins.”

The Melnick team also discovered the key missing link between EZH2 and BCL6: the CBX8 protein. It acts as a biochemical bridge by attaching to the histone mark placed by EZH2 and the BCOR protein that interacts with BCL6. 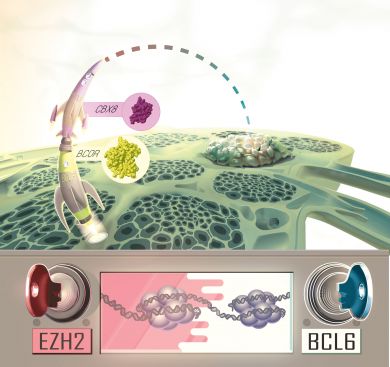 EZH2 and BCL6 keys have to be turned to activate B-Cell germinal center transformation “It is the glue that makes the whole thing work,” Melnick said.

To stop out-of-control, lymphoma-generating germinal centers, the Melnick team suggests that disarming the biochemical “keys” could be key.

“If you hit both keys, then the missile silo goes dark and the germinal center B-cells fall apart,” Melnick said. “Either one alone is only partially effective; you have to disable both arms of the PRC1-BCOR tethering mechanism.”

This is possible by combining BCL6 and EZH2 inhibitors. EZH2 inhibitors are in clinical trials for patients with lymphomas at Weill Cornell and elsewhere, and BCL6 drugs have been developed by Dr. Melnick and colleagues and are not yet in human trials. The Melnick team showed that the EZH2-BCL6 drug combination synergistically suppressed human diffuse large B-cell lymphomas in pre-clinical studies.

“Although both EZH2 and BCL6 inhibitors inhibited tumor growth alone, the combination more potently and significantly suppressed lymphoma growth,” Melnick said. “In addition, the combination was not toxic to normal cells.”

The work was supported in part by grants from the National Institutes of Health, the National Cancer Institute, the American Society of Hematology, and the Leukemia and Lymphoma Society.