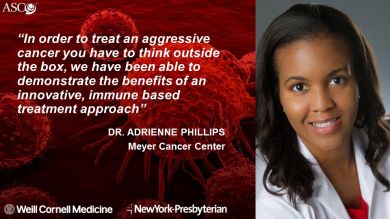 A drug that recruits immune cells to fight an aggressive form of lymphoma that disproportionately affects minorities in the United States appears to be more effective than chemotherapy, according to new research from Weill Cornell Medicine and NewYork-Presbyterian.

The findings of a small clinical trial demonstrate that the antibody drug mogamulizumab, known as moga, induces tumor responses in nearly 28 percent of patients with a fast-growing and difficult to treat blood cancer called relapsed or refractory adult T-cell leukemia-lymphoma (ATLL). These response rates appeared better than the standard chemotherapy comparison results in this study. The investigators say moga may represent a breakthrough in treating ATLL, for which there are currently no drugs approved in the United States to specifically treat the disease. Mogalizumab binds to CCR4 proteins on tumor cells, allowing the immune system to better target them.

"In order to treat an aggressive cancer such as ATLL, you have to think outside the box," said Dr. Adrienne Phillips, an assistant professor of medicine and a member of the Sandra and Edward Meyer Cancer Center at Weill Cornell Medicine and an oncologist with the Bone Marrow and Stem Cell Transplant Program at NewYork-Presbyterian/Weill Cornell Medical Center, who presented her findings during the annual American Society for Clinical Oncology (ASCO) meeting on June 5 in Chicago. "By working with international collaborators to conduct the largest randomized trial ever in relapsed or refractory forms of this devastating cancer, we have been able to demonstrate the benefits of an innovative, immune based treatment approach and have taken a large step forward in efforts to make this treatment option available for ATLL patients here."

Since the disease is rare in the United States, with an estimated 120 new cases per year, it has been difficult to conduct definitive clinical trials of new drugs for ATLL patients.

"The importance of clinical trials to treat uncommon cancers cannot be overstated," said Dr. Julie Vose, ASCO president and chief of oncology and hematology at the University of Nebraska Medical Center and a lymphoma expert. "Expanding on Dr. Phillips' research could provide insight into how to best use moga to maximally benefit ATLL patients as well as those with other related T-cell lymphomas."

ATLL can be caused by a virus known as HTLV-1, which is transmitted through bodily fluids. The virus persists for the entire lifetime of its human host, prolonging an attack on the body's white blood cells, known as lymphocytes. This chronic assault can lead to a broad spectrum of diseases, including ATLL. Some 20 million people in certain regions of the world, including the Caribbean, sub-Saharan Africa, Asia and Latin America are infected with the virus, and approximately 5 percent will ultimately develop the aggressive cancer. It is much less common in the United States; however, those affected by HTLV-1 associated cancers such as ATLL have been in desperate need for effective therapies.

With no approved drugs to specifically treat ATLL in the United States, oncologists have been using chemotherapy drugs developed to treat other forms of T-cell lymphomas. Some therapies that have been approved in other countries have remained experimental in the United States because of the lack of domestic clinical trials to date.

To evaluate one such treatment option, the Weill Cornell Medicine study — sponsored by the drug's manufacturer, Kyowa Hakko Kirin Pharma, Inc. — enrolled 71 patients with ATLL from six countries into a three-year, multi-site, phase 2, randomized clinical trial that compared the effectiveness of moga to chemotherapy. In addition to inducing a higher tumor response rate than chemotherapy, moga was associated with a median duration of tumor response of five months. Some patients whose disease progressed on chemotherapy went on to respond to subsequent moga treatment. Side effects consisted primarily of infusion reactions, rash and infections.

The investigators say their results in this very challenging disease highlight the therapeutic potential of this innovative agent and underscore the need for additional clinical trials in the United States to further optimize moga's efficacy.

"ATLL is a fast-growing and aggressive blood cancer that continues to be challenging for patients," said Meghan Gutierrez, chief executive officer of the Lymphoma Research Foundation. "Studies like this one demonstrate the value of international collaboration as well as the potential of research to positively impact clinical outcomes for patients with lymphoma and other cancers."