Adult T-cell lymphoma/leukemia (ATLL), known as a rarer subtype of peripheral T-cell lymphoma, presents very differently and can be more prevalent in certain worldwide demographics compared with others, explains Adrienne A. Phillips, M.D. 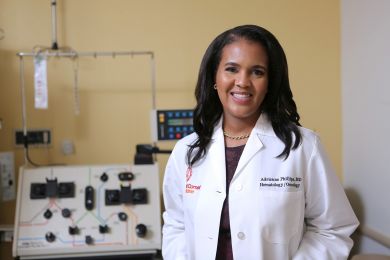 "The main take-home message is that this is a rare condition, but if you live in a community where you have immigrants from the Caribbean and Latin America, it is actually not so rare,” said Phillips. “Here, in New York City, we have that population. It is not as uncommon as we are taught in the textbooks. That is the first thing.”

Novel regimens are being explored for these patients. Findings of a multicenter, randomized clinical trial of 71 patients comparing the anti-CCR4 monoclonal antibody mogamulizumab (n = 47) with investigator's choice (n = 24) in the treatment of patients with relapsed/refractory ATLL showed that those who received mogamulizumab had an investigator-assessed overall response rate (ORR) of 34%. The ORR was 23.4% per blinded independent review. The most frequently observed adverse events in the mogamulizumab-treated arm were infusion reactions, rash/drug eruption, and infections.
In an interview with OncLive, Phillips, an assistant professor at Weill Cornell Medicine/NewYork-Presbyterian Hospital, discussed the subtypes of ATLL, the challenges with treating them, and what community oncologists need to know about these patient populations. Phillips shared this insight during the 2017 OncLive® State of the Science SummitTM on Hematologic Malignancies.

OncLive: Please provide an overview of your presentation on these rarer T-cell lymphomas.

Phillips: ATLL is a rare subtype of peripheral T-cell lymphoma. It has 4 different subtypes: acute, lymphoma, chronic, and smoldering subtypes. It is caused by a virus called HTLV-1, which about 20 million people worldwide are affected with. Most patients are in the Caribbean or Japan; some are in Latin America and Africa. It is relatively uncommon in the United States. Across the nation, approximately less than 1% carry the virus. However, because here in New York City we treat a

number of immigrants from the Caribbean and Latin America, we see higher rates. Therefore, we are seeing more ATLL.

Do each of these 4 subtypes have their own treatment strategy, or can you treat them similarly?

That is a good question. Most of the treatment information comes from Japan, where the acute subtype predominates. I have conducted a retrospective series here in New York where we find that our Caribbean patients, even though they might have high white counts and be defined as the acute subtype, also have a lot of adenopathy. In Japan, the treatment for the acute subtype and the lymphoma subtype generally is combination chemotherapy. However, in western countries—because the disease is so rare—the standard is not well defined.
Here, we would treat patients as if they had lymphoma, with combination chemotherapy. Ideally, we would put them on a clinical trial, but I should note that in Europe they conducted a large retrospective meta-analysis that showed, for those with the acute subtype, antiviral therapy with interferon may be useful. We haven’t really found that here in the United States, but again, there are limited patients.

Are there any ongoing studies exploring these populations further?

Absolutely. Although ATLL is a type of T-cell lymphoma, studies of T-cell lymphoma frequently exclude ATLL because those patients have a particularly poor prognosis and the mechanism for their leukemogenesis or lymphomagenesis is related to the virus, which is distinct from some of the other subtypes.

At Weill Cornell Medicine, we were part of a large prospective study of a novel monoclonal antibody called mogamulizumab that targets an antigen on these ATLL cells called CCR4. It is overexpressed in about 90% of ATLL cases. We found that in the relapsed/refractory setting, there was a promising signal and decent response rate of about 34%. We are treating patients a little bit differently, and everyone should be enr
olled on a clinical trial.

What do we know about mogamulizumab thus far? How is it tolerated?

It has actually been approved in Japan—where the disease is more common—since 2012 and that is where a lot of the early studies have been done. Again, it targets the CCR4 antigen, which is commonly expressed on ATLL cells. Weill Cornell Medicine, in addition to 21 other sites in the Western world across the United States and in Europe, have looked at in the Western populations. Again, we found a decent response rate compared with chemotherapy in the relapsed/refractory setting.

What are some challenges with this patient population? What would you like to see tackled in the near future?

There are a number of challenges related to the disease itself; it’s rare. It also primarily affects underrepresented minorities and immigrant populations. It has no standard therapies, so the recommendation is to enroll patients on clinical trials and, frequently in these minority underrepresented populations, clinical trial participation is low. For community providers, once a case is recognized, it’s important to get them referred to a center that has a trial early on and hopefully, we can enroll them and they will be eligible for it. However, it’s a challenge.

Then, transplant is really the only curative option for this condition from retrospective studies in Japan. About one-third of patients can be cured and have long-term disease survival. Again, dealing with our patient population here in the United States, which is primarily immigrant and underrepresented, can be a challenge to find donors. The earlier that community physicians can refer them for that transplant evaluation, the better.

Although it’s classified as a non-Hodgkin lymphoma and our instinct is to treat it as such with combination chemotherapy, CHOP, or EPOCH, it doesn’t behave as well. It is caused by this virus, and we need to be treating these patients differently. This again includes referring for clinical trials sooner than later because they tend to progress quickly, be refractory, and transplant is the only curative option.
If they can refer them to a center that has a novel therapy and even a transplant center where you can work both with the hematologist giving the induction chemotherapy and the transplanter simultaneously identifying a donor and working them for transplant, the process can perhaps be a little bit more seamless.

Does ATLL often get misdiagnosed?

Though it’s rare, it has some pathognomonic features that we all learn in the textbook to look out for. Someone might not see it in their career, but if you do see, for example, flower cells under the microscope [that is a sign]. These ATLL cells look like clover leaves and they have very pathognomonic features. If you see that, you should definitely suspect the diagnosis.

Epidemiologically, in the United States, we see it primarily among people who immigrate from the Caribbean, Latin America, and Africa. If that is the patient’s profile, you might have a higher degree of suspicion that this would be the case. If you are working with a good hematopathologist, [they will know that] this is a T-cell disease, not a B-cell disease. There are certain immunophenotype markers that are classic for ATLL—the expression of CD25 along with other CD4 T-cell markers can help confirm the diagnosis in addition to a positive virology for HTLV-1.That is a wonderful question. There are people looking at that. It is a T-cell disease and, right now, CAR therapy is looking at generating CARs on T cells to treat B-cell malignancies. However, it could be really interesting in ATLL. Other immune-based therapies certainly could be interesting.

Therefore, in order to study this, patients need to be on clinical trials and, because of the population that it impacts, they are less likely to be represented on a clinical trial.