Using a new approach, scientists at Weill Cornell Medicine, The Scripps Research Institute (TSRI) and collaborating institutions have discovered a novel drug candidate that could be used to treat certain types of breast cancer, lung cancer and melanoma.

The new study focused on serine, one of the 20 amino acids (protein building blocks) found in nature. Many types of cancer require synthesis of serine to sustain rapid, constant and unregulated growth.

To find a drug candidate that interfered with this pathway, the team screened a large library of compounds from a variety of sources, searching for molecules that inhibited a specific enzyme known as 3-phosphoglycerate dehydrogenase (PHGDH), which is responsible for the first committed step in serine biosynthesis.The new study focused on serine, one of the 20 amino acids (protein building blocks) found in nature. Many types of cancer require synthesis of serine to sustain rapid, constant and unregulated growth.

"In addition to discovering an inhibitor that targets cancer metabolism, we also now have a tool to help answer interesting questions about serine metabolism," said Luke L. Lairson, assistant professor of chemistry at TSRI and principal investigator of cell biology at the California Institute for Biomedical Research (CALIBR).

Lairson was senior author of the study, published recently in the Proceedings of the National Academy of Sciences (PNAS), with Lewis Cantley and former postdoc Costas Lyssiotis, now at the University of Michigan. 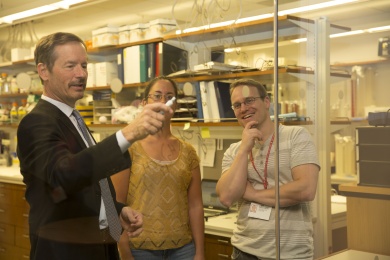 Serine is necessary for nucleotide, protein and lipid biosynthesis in all cells. Cells use two main routes for acquiring serine: through import from the extracellular environment or through conversion of 3-phosphoglycerate (a glycolytic intermediate) by PHGDH.

"Since the late 1950s, it has been known that cancer cells use the process of aerobic glycolysis to generate metabolites needed for proliferative growth," said Lairson.

This process can lead to an overproduction of serine. The genetic basis for this abundance had remained mysterious until recently, when it was demonstrated that some cancers acquire mutations that increased the expression of PHGDH; reducing PHGDH in these "serine-addicted" cancer cells also inhibited their growth.

Lairson and colleagues hypothesized that a small molecule drug candidate that inhibited PHGDH could interfere with cancer metabolism and point the way to the development of an effective cancer therapeutic. Importantly, this drug candidate would be inactive against normal cells because they would be able to import enough serine to support ordinary growth.

Lairson, in collaboration with colleagues including Cantley, Lyssiotis, Edouard Mullarky of Weill Cornell and Harvard Medical School and Natasha Lucki of CALIBR, screened through a library of 800,000 small molecules using a high-throughput in vitro enzyme assay to detect inhibition of PHGDH. The group identified 408 candidates and further narrowed this list down based on cell-type specific anti-proliferative activity and by eliminating those inhibitors that broadly targeted other dehydrogenases.

With the successful identification of seven candidate inhibitors, the team sought to determine if these molecules could inhibit PHGDH in the complex cellular environment. To do so, the team used a mass spectrometry-based assay (test) to measure newly synthesized serine in a cell in the presence of the drug candidates.

One of the seven small molecules tested, named CBR-5884, was able to specifically inhibit serine synthesis by 30 percent, suggesting that the molecule specifically targeted PHGDH. The group went on to show that CBR-5884 was able to inhibit cell proliferation of breast cancer and melanoma cells lines that overexpress PHGDH.

As expected, CBR-5884 did not inhibit cancer cells that did not overexpress PHGDH, as they can import serine; however, when incubated in media lacking serine, the presence of CBR-5884 decreased growth in these cells.

The group anticipates much optimization work before this drug candidate can become an effective therapeutic. In pursuit of this goal, the researchers plan to take a medicinal chemistry approach to improve potency and metabolic stability.