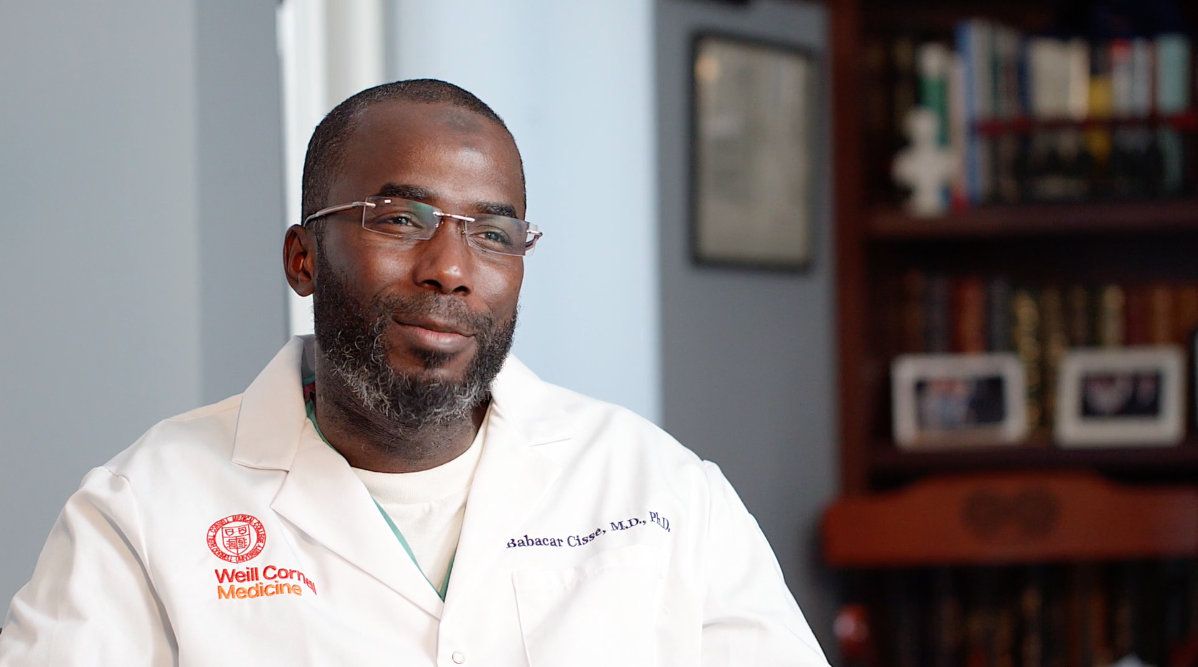 I grew up in Dakar in Senegal, and after I finished what would be middle school, I fell ill with malaria and gastric ulcers. This was my first encounter with the health system in Senegal. I was very disappointed. Hospitals and clinics had very limited resources to care for their patients. It was an eye-opener for me.

That’s when I became interested in medicine. When you find yourself in a situation where the medical system is not as sophisticated as what you have here in the United States, every single doctor becomes a role model, because you know that these are people who are not wealthy. You know that they are doing it for the love of what they do.

I graduated from high school when I was 19, which is the average age for Senegal.

I had a scholarship to go to Morocco for university studies, but I lost the scholarship. To this day, I do not know the reason. A year later, I tried to join what was the only medical school then in Senegal and I was told that only recent high school graduates from that year were eligible. Since I did not have money to leave Senegal for college, I took part-time classes at the British Senegalese Institute, hoping that I could one day attend college somewhere. I had a cousin in the U.S. who advised me to apply to colleges here.

During that time, I visited an uncle who had a place in one of the biggest markets in Senegal. He asked me, “Why is it that you’re not trying to go outside of Senegal to continue your education?” I told him that I was trying, but he said, “No, you’re not trying hard enough. You should go.” This is a person who really loved me and who believed in me, who wanted me to continue my education. I told him, “Look, I have a passport and a visa to go to the U.S., but I don’t have the money to buy the tickets.” He offered to help. I said, “If you want to help, here’s what we can do. I can borrow money from you, and then when I go to the U.S., I’ll pay you back. I don’t know when I’m going to be able to pay you back, obviously, because my goal is to go for education, meaning that I won’t be having an income for the foreseeable future.” He said, “That’s not a problem. Just go and I’ll help you.” He was the one who bought the tickets for me, and that’s how I came to the U.S.

When I landed at JFK on August 30, 1998, I was very excited but also worried. This was the first time I had been outside Senegal. I had $26 in my pocket. A taxi driver offered to take me to the Bronx, where my cousin was. We could not find the address. And I spent my first night at the taxi driver’s house, and he fed me and made me feel at ease. The next morning we did find the right address.

I did not have money to go to school right away. So I worked as a busboy at a restaurant. During my lunch break, I would go to the New York Public Library and look through college handbooks for schools that offered scholarships to international students. That’s how I came across Bard College. They have a program called Distinguished Scientist Scholarships that pay full tuition for students who are interested in the sciences or math. I applied, and during the interview I told them, “I know that my background is not the typical background here, but I think within the resources that I had, I did reasonably well, and I hope to do well if you give me the opportunity.” Two weeks later, they sent me an acceptance letter.

I started out majoring in molecular biology, and then I took classes in physics and chemistry, which I fell in love with, so these subjects became my focus. After that, I applied to medical school and ended up at Columbia.

One of the things I noticed about Columbia when I interviewed there were the kids coming out of the admissions office, and people on the street selling things for “one dollar, one dollar.” It reminded me of the streets in Senegal, but at the same time you were talking about the best doctors and the best scientists from all over the world, who are basically shaping medicine in this environment. The sky was the limit.

Having come from Senegal, getting into medical school, then graduating from the College of Physicians and Surgeons at Columbia, and ending up at NewYork-Presbyterian for my residency means a lot. This was a dream that I had. I found in medicine a niche where I can make everlasting changes in people’s lives. I just fell in love with medicine, and the fact that, especially in Africa, where you know that you can cure people and you’re not expecting anything from them out of that — and seeing them getting better and moving on with their lives, and being grateful that somebody took care of them. That aspect of medicine, and the fact that it is something that you can leave behind, was always the driving force for me.

My neurosurgical training at NewYork-Presbyterian/Weill Cornell Medical Center was superb in every respect. The diversity of the patient population and the commitment of every staff member to the highest standards of patient care are everything that I was looking for in a training environment. Dr. Philip Stieg and the department’s commitment to resident training and growth will leave an indelible mark on me. I have enjoyed these years of training and I am looking forward to being a faculty member to give back to our patients, colleagues, residents, and communities — and the world beyond.