Chemotherapy may be one of the most effective ways to put the brakes on cancer cells that are growing on hyperdrive, but it only works on cells that are actively dividing. In the case of blood cancers like leukemia, some cells are able to escape elimination by not actively dividing or by burrowing into bones, where they lay dormant until a later date. When they emerge, these leukemia stem cells are able to spawn new diseased progeny, which in turn multiply and spread to become cancerous all over again. This so-called “minimal residual disease” is the bane of leukemia treatment, and kills nearly all of those afflicted. 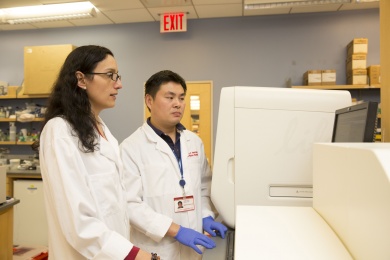 A team of researchers at the Sandra and Edward Meyer Cancer Center of Weill Cornell Medicine believe that solving the stem cell conundrum will save countless lives and offer a new paradigm of treatment for fatal diseases such as acute myeloid leukemia (AML).

AML, an aggressive form of leukemia with unique and evolving individual biological characteristics that make it particularly difficult to cure with a one-drug-fits-all approach, is the most common form of acute leukemia, representing 30 percent of the 300,000 American adults living with leukemia each year. Only 25 percent of patients with AML survive more than five years.

Monica Guzman, Ph.D., assistant professor of pharmacology, has devoted her career to studying the role of stem cells in leukemia.

Hematopoietic stem cells have unique regenerative properties that are essential for the constant renewal of blood and in the production of billions of new blood cells each day. Normally, the bone marrow has immature blood stem cells whose job is to make mature blood cells over time – either red blood cells, lymphoid cells or myeloid cells (infection-fighting cells, oxygen-carrying cells, or platelets that form blood clots to stop bleeding)

In AML, myeloid cells accumulate rapidly without maturing, forming abnormal collections of cells, or “blasts,” that never get a chance to become the platelets, white or red blood cells they were programmed to be, and end up crowding out normal, healthy cells instead.

Chemotherapy kills these cells by blocking their replication machinery. But cancer stem cells that are not actively replicating at the time of treatment are able to survive, and the regenerative properties that serve us well when healthy turn deadly as they allow the cancer to re-emerge.

Being able to eliminate diseased stem cells would greatly enhance the effectiveness of treatment. But first, scientists must find and isolate them, which has been a big challenge. 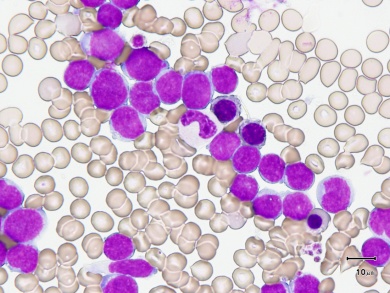 Acute myeloid leukemia cells Image credit: Dr. Mayumi Sugita Leukemia stem cells look and behave in culture like many other ordinary blood or bone marrow stem cells, which makes them difficult to identify and isolate just by morphology (size and shape). Much of Guzman’s work has involved searching for biological differences that might be used to differentiate and characterize the cells. Her lab and other groups have identified proteins (antigens) found on the surface of blood cells, some of which seem to only appear on leukemia stem cells.

By using these antigens, Guzman and her colleagues, who include Gail Roboz, M.D., and Duane Hassane, Ph.D., can track the diseased stem cells – and target them. In fact, they are working on pre-clinical assays in preparation for clinical trials for a treatment that could harness the body’s immune response as a novel way to kill leukemia stem cells and blasts.

The trial will utilize engineered T cells with chimeric antigen receptors (aka CAR-T cells) which have been specifically created by French bioresearch firm Cellectis to target CD123, one of the protein markers in leukemia stem cells. The hope is that the engineered immune cells will recognize and attack the AML blasts and stem cells with no collateral damage to healthy cells.

Current chemotherapy protocols have remained unchanged for the past three decades. Most adult AML patients achieve initial remission lasting an average of two years, which could provide a good window for a low-toxicity maintenance CAR-T immunotherapy program to eliminate residual disease and prevent relapse, Guzman said. She also hopes to eventually test the CAR-T therapy as a more precise, off-the-shelf first-line treatment.

While CD123 is found on the surface of many variants of AML, may not be universally present. So the Weill Cornell researchers are working in close collaboration with Cellectis to identify additional antigen markers and their reciprocal CAR-T candidates.

“Treating AML is like playing a game of Whack-A-Mole. You can hit one, but there are so many clones, there’s always the question of whether another clone will pop up.”

Guzman and Roboz are also investigating ways to tease leukemia stem cells out of hiding and into the open, where they would be easier to find and kill. These include drugs known to mobilize normal stem cells which are already used to help prepare patients for stem cell transplants. Changes in the biology and behavior of diseased stem cells and their relationship with their niche microenvironment within the bone marrow may necessitate the development of new drugs, but Guzman is confident the strategy has potential.

Using a variety of cutting-edge technology like digital PCR and mass cytometry, Guzman is also elucidating the role of other cellular processes, such as metabolic signaling networks, in AML. A recent study published in Cell Reports revealed the role and function of the heat shock protein 90 (Hsp90), and identified certain subpopulations of AML patients who would most benefit from Hsp90 inhibition therapy.

“It is critical to understand the molecular pathogenesis of AML to enable therapeutic advances,” Guzman said. “Other targeted compounds under testing have generated disappointing results because they were designed to address unique genetic and molecular lesions, and did not address residual leukemia stem cells nor the fact that AML often results from the cooperation of several oncogenic events. We really believe that once we have a good way to track residual leukemia stem cells, we should be able to treat these patients.”

Read more about Guzman's recent research into the role of protein signaling networks in AML here.

Needle in a Haystack