Dean Laurie Glimcher Ovarian cancer shuts down immune system cells that would otherwise act as a first line of defense against the deadly tumor, Weill Cornell Medical College scientists report today. But a therapy that restores the cells' disease-fighting abilities could provide a powerful new strategy to attack the cancer, which kills more than 14,000 women each year.

In the June 11 issue of Cell, the investigators identify a gene in dendritic cells that ovarian cancer turns on, resulting in the cells' inability to mount an effective response against the tumor. In preclinical studies, they demonstrate that turning off the gene, XBP1, restores dendritic cell function and triggers robust immune responses against ovarian tumors.

"The high death rate in ovarian cancer has remained the same over the last 40 years because there have been no new therapeutic strategies. This study offers us a new approach — a bright beacon of hope," says senior author Laurie H. Glimcher, M.D., the Stephen and Suzanne Weiss Dean of Weill Cornell Medical College and a researcher in its Sandra and Edward Meyer Cancer Center.

"Harnessing the natural ability of our immune system to eliminate malignant cells represents the most promising anti-ovarian cancer strategy since the development of chemotherapy," she adds. "We look forward to developing new ways to unleash protective immune responses in ovarian cancer."

The findings extend the Glimcher lab's discovery that XBP1 is a potential Achilles' heel in cancer. Investigators there reported last year that the gene plays a key role in the development and progression of the triple negative form of breast cancer, a lethal tumor that's especially difficult to treat. Because of XBP1's ability to promote tumor cell survival, the group suspected it could also play a role as an inhibitor of anti-tumor immunity.

The gene is part of the endoplasmic reticulum stress response pathway — also called the unfolded protein response — that can allow tumors to grow and survive when they are deprived of nutrients and oxygen.

Floating in this broth is a mash of cancer cells, dendritic cells, and other immune cells that make up the tumor microenvironment. Because it is in contact with other organs within the abdomen, the cancer can easily spread.

Analyzing human patient specimens and samples from preclinical models of disease, Dr. Glimcher and her team found that ovarian cancer promoted a tumor microenvironment full of toxic, reactive oxygen molecules that modified proteins located in the endoplasmic reticulum. This, in turn, induced XBP1 activation and produced a buildup of lipid molecules within the dendritic cells contained in the soup.

While that kept dendritic cells healthy, XBP1 also switched on genes that block their ability to stimulate other immune cells, says lead author Dr. Juan R. Cubillos-Ruiz, an instructor of microbiology and immunology in medicine at Weill Cornell. "Dendritic cells normally take an antigen — a bit of cancer cell — and show it to other immune cells called T cells. This crucial process enables T cells to eliminate tumors," he says.

This is the first time scientists have found that XBP1 can co-opt and turn off immune cell function in cancer. "We are now devising first-in-class drugs that can inhibit the activity of XBP1 in both cancer cells and dendritic cells, which would both sensitize the cancer to treatment and restore an immune response against it," Dr. Cubillos-Ruiz says. Apart from some experimental studies, ovarian cancer is not treated with immunotherapy.

"Immune-based approaches have succeeded in other lethal cancers, such as melanoma, and it may be very beneficial as well in ovarian cancer," Dr. Glimcher says. "Our study shows that XBP1 activation in dendritic cells drives both primary and metastatic ovarian cancer progression. We believe that targeting XBP1 should both inhibit tumor growth and enhance anti-cancer immunity." 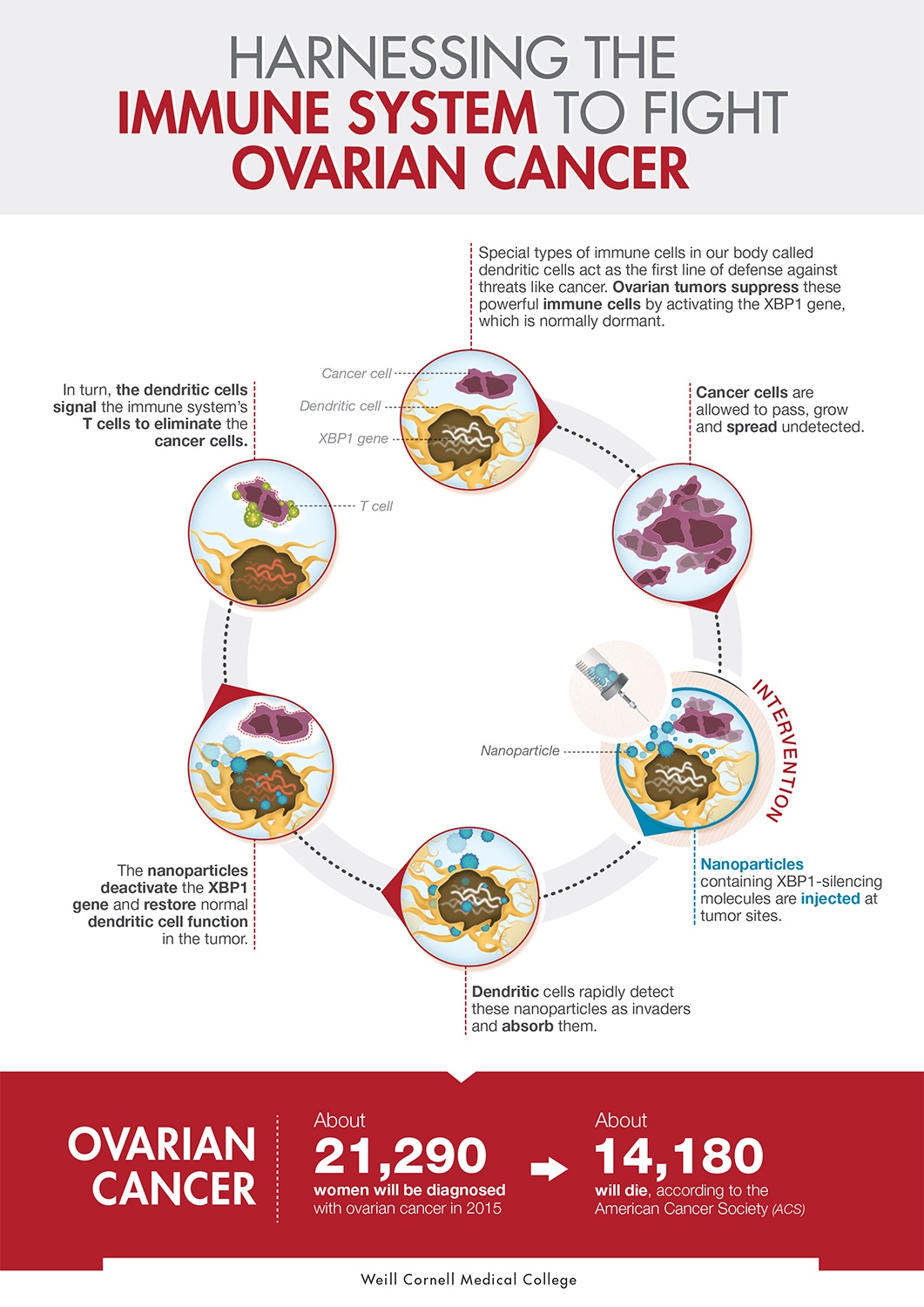 Private donors step up to save medical research

Increased funding for medical research is a terrific first step

Glimcher among Crain's "Most Powerful Women of 2015"