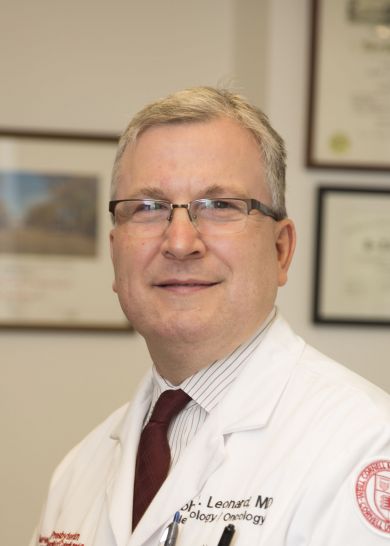 Leonard, the Richard T. Silver Distinguished Professor of Hematology and Medical Oncology at Weill Cornell Medical College, presented “How I Treat Mantle Cell Lymphoma” at the meeting in Chicago. He outlined two key principles of his treatment approach.

The first is to observe patients with asymptomatic MCL for as long as possible. In discussing the watch-and-wait approach, Leonard referred colleagues to data from the 2009 study that he co-authored in the Journal of Clinical Oncology, “Outcome of Deferred Initial Therapy in Mantle-Cell Lymphoma.”1 The overall survival (OS) of patients in the observation group exceeded that of patients in the early treatment group.

Leonard’s preferred initial treatment for symptomatic patients is bendamustine-rituximab. For maintenance treatment, he uses rituximab or novel approaches. He cited the 2013 study by Rummel et al in the Lancet, “Bendamustine Plus Rituximab Versus CHOP Plus Rituximab as First-Line Treatment for Patients with Indolent and Mantle-Cell Lymphomas: An Open-Label, Multicentre, Randomized, Phase 3 Non-Inferiority Trial.”2 Patients in the bendamustine-rituximab group experienced increased progression-free survival (PFS) with fewer toxic effects.

Leonard listed these potential novel agents for use in treating MCL:

He reviewed key clinical trials for bortezomib, lenalidomide, temsirolimus, everolimus, and palbociclib, noting the status and apparent potential of each trial and agent. In discussing his choice of ibrutinib to treat patients with relapsed/refractory MCL, he directed colleagues to the 2013 study by Wang et al in the New England Journal of Medicine, “Targeting BTK with Ibrutinib in Relapsed or Refractory Mantle-Cell Lymphoma.”3

Leonard also discussed ABT-199, a selective inhibitor of the Bcl-2 protein. “ABT-199 shows a high Bcl-2 affinity but a lower affinity for Bcl-xL and McI-1,” he said. “It is active in Bcl-2-dependent tumor cell lines (RS4; 11) and ineffective in Bcl-xL-dependent tumor cell lines (H146).” He noted that the novel agent, which is orally bioavailable, showed greater than a hundred-fold improved functional selectivity.

Throughout his talk, Leonard emphasized the importance of assessing patients with advanced-stage MCL using the Mantle-Cell Lymphoma International Prognostic Index (MIPI). According to the MIPI, patients who score 0 to 3 points are considered low risk; those who score 4 to 5 points are intermediate risk patients, while those who score 6 to 11 points are at high risk. “Virtually all patients under age 60 and many under age 70 with good performance status, normal lactate dehydrogenase and white blood count will be low risk,” he said.

For symptomatic patients interested in transplantation, Leonard recommends autologous stem cell transplants (ASCT). He stresses to the patient that the chief benefit of ASCT is likely to be increased PFS, not OS. He considers allogeneic stem cell transplant in selected patients who have experienced multiple relapses and shortened remissions.

He encourages colleagues to consider clinical trials for patients with MCL.“We’re starting to explore the idea of tumor profiling to help us identify patients who will do better or worse with the disease or who will do better with one treatment or a combination of agents,” he said. “We want to be able to look at an individual patient’s subsets to give them a more specific treatment.”

Leonard concluded his talk by noting that, despite the gains already made in MCL treatment, the importance of tumor profiling cannot be overstated. “Right now, it’s almost as if—based on outcomes—it’s not the [available] treatment that matters, it’s the disease itself and the patient’s genetic makeup that determines overall survival,” he said. “Tumor profiling gives us a way to address that.”

Potential of immunotherapy in MCL landscape

Exciting advancements in the field of mantle cell lymphoma

The role of transplant in mantle cell lymphoma