The medication was so effective in mantle cell lymphoma, an aggressive, incurable cancer, that the Food and Drug Administration named ibrutinib a "breakthrough" drug. The unprecedented response — 68 percent of patients went into partial or complete remission when they took it — gained the agent accelerated approval last November.

But the disease remains a challenge. Researchers, including those at Weill Cornell Medical College who participated in the ibrutinib clinical trial, found that lymphoma cells in the majority of patients who were taking the drug on its own became resistant to it, either quickly or over time. And patients whose disease progressed often saw their tumors grow faster than before.

Now a research team led by Weill Cornell Medical College has revealed key insight into why late resistance occurs. And it has shown in preclinical studies that two different drug-treatment strategies may be useful for patients in whom ibrutinib does not work. More than 66,000 new cases of non-Hodgkin's lymphoma are diagnosed in the United States each year, with mantle cell representing an important subset.

The findings, published in Cancer Discovery, have quickly led to a new clinical trial sponsored by the National Cancer Institute. Weill Cornell is recruiting mantle cell lymphoma patients to participate.

"While for many patients ibrutinib represents a valuable treatment option, it has limitations, and we have been able to demonstrate how novel therapy combinations that target the cancer's resistance pathways might possibly work better," says the study's lead author, Dr. Selina Chen-Kiang, professor of pathology and laboratory medicine and of microbiology and immunology in the Sandra and Edward Meyer Cancer Center at Weill Cornell.

"Of course, we won't be able to judge how effective these therapies are in patients until clinical trials are conducted, but one is already underway."

The study takes a new approach to uncovering ibrutinib resistance, Dr. Chen-Kiang says. Researchers integrated sequencing of both DNA and RNA on mantle cell lymphoma patients, comparing normal cells from the insides of their cheeks to tumor cells in the lymph nodes and the blood before and after treatment. In this way they discovered genes that were specific to the cancer cells, and how the DNA and RNA changed during ibrutinib treatment.

"I believe this is the first integrated, longitudinal genetic analysis of its kind to understand resistance to a targeted therapy," she says.

The scientists detected two patterns of resistance. For patients who acquire resist 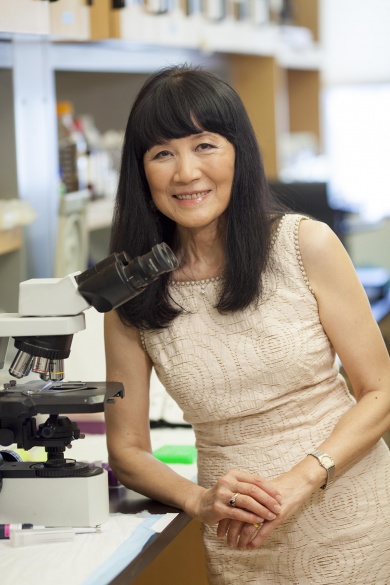 Selina Chen-Kiang, Ph.D. ance later in the course of their therapy, the researchers found a single amino acid mutation in Bruton's tyrosine kinase (BTK), an enzyme that contributes to mantle cell lymphoma survival. The mutation makes ibrutinib much less able to bind to BTK, producing resistance. On the other hand, patients in the study who either never responded to the drug or acquired resistance early were generally not found to have a BTK mutation, suggesting that another mechanism was involved.

"These findings reveal several mechanisms by which patients become resistant to ibrutinib, one of which is through a mutation in the gene that the drug targets," says Dr. Lewis C. Cantley, the Meyer Cancer Center's director. "It shows that the drug is working as advertised, because when it can't hit its target anymore, it stops being effective. The study's results really do suggest a new approach to treating this disease."

Based on their genetic findings, the researchers devised two treatment strategies that they tested in lymphoma cell lines. Both involve serial use of two anti-cancer drugs — the first to weaken or "prime" the cancer cells, and the second to deliver an added impact. Both use the experimental agent palbociclib (which selectively inhibits two cell-cycle promoting proteins, CDK4 and CDK6) to slow down the cancer's growth and sensitize cells to the killing power of a second drug.

Importantly, one of the strategies may be effective in the presence of a BTK mutation. Previous clinical studies by the Chen-Kiang team have shown that palbociclib itself can significantly inhibit the growth of mantle cell lymphoma. So in the cells with a mutated BTK, investigators administered palbociclib first, and delivered the second blow with the drug idelalisib. (Idelalisib is a PI3K delta inhibitor, which shuts down a pathway that plays a key role in the growth of B cell cancers.)

In lymphoma cells that lacked the BTK mutation (and have normal BTK), the investigators also started with palbociclib, but then followed with ibrutinib, since both drugs are well tolerated by patients, she says. Palbociclib may be damaging enough to the cancer in humans that ibrutinib can then work more effectively, Dr. Chen-Kiang says. If this sequence does not work, she says, the palbociclib-idelalisib combination might.

Physician-scientists are testing the combination of palbociclib and ibrutinib in the NCI-sponsored clinical trial at Weill Cornell.

"We are very excited about the promise of this mechanistic, targeted approach to treatment of mantle cell lymphoma, and perhaps many other cancers," Dr. Chen-Kiang says.

Dr. Martin has received an honorarium from Janssen Pharmaceuticals. Dr. Sharman has received research funding from Pharmacyclics; Dr. Leonard is a consultant for the company; and Dr. Chang is an employee of and holds stock options there. Dr. Ali is an employee of Foundation Medicine. Dr. Cantley is co-editor-in-chief of Cancer Discovery. He recused himself from the peer review of the study.