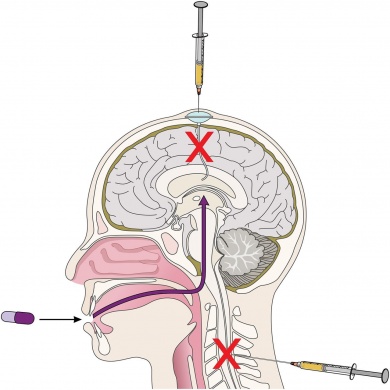 Different routes of CNS-directed therapies in MCL. Credit: Patrick Lane, ScEYEnce Studios The Bernard et al data raise the question of whether we might see new strategies to reduce the occurrence of MCL progression within the CNS among high-risk patients similar to strategies used in DLBCL. It may be more challenging to answer questions about CNS prophylaxis than it is to demonstrate activity of an agent against CNS MCL. The mere concept that front-line therapy might impact CNS progression is challenging to grasp given that CNS progression is frequently a late event. Unfortunately, clinical trials rarely collect data on sites of relapse or outcomes of subsequent therapies, and this information is challenging to collect retrospectively. Moreover, better front-line strategies may paradoxically give the appearance of an increase in the incidence of CNS involvement if more patients live longer. Similarly, because MCL is likely as incurable in the CNS as it is elsewhere, it is possible that different front-line strategies will not actually impact the incidence but rather the timing of CNS progression (still a worthy goal). Reports of overall incidence may be less informative than time-to-event statistics. Finally, because the proportion of patients at highest risk for CNS progression is quite low in most clinical trials, individual studies may have limited power to demonstrate a difference and meta-analyses may be required.

Regardless of the challenges involved in data interpretation, the fact that there are now well-tolerated agents with a hint of activity against CNS MCL is a step forward. Reports such as this one by Bernard et al demonstrate the ongoing importance of clinical observation.