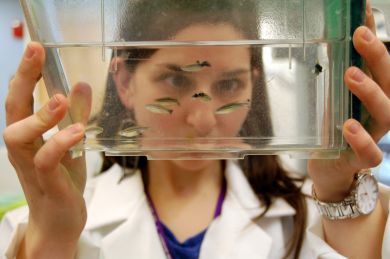 Imagine if your doctor was able to decide between two drugs to tackle your tumor based on a test --- on a fish?

Thyroid cancer patients may someday have that opportunity thanks to a breakthrough in the lab of Yariv Houvras, M.D., Ph.D., assistant professor at Weill Cornell Medicine. After six years of trial and error, his team has created the first zebrafish model of thyroid cancer.

Currently, the most sophisticated cancer model in fish is melanoma. The often fatal skin cancer has thousands of mutations, of which we understand about a dozen. Discovery has progressed rapidly, however, thanks in part to the small fish with transparent skin. It has allowed scientists to tinker with tumors in test tubes, transfer the gene mutations into fish, create animals with those mutations in about a week, and replicate them for large scale study and drug testing.

“We can make thousands of transgenic models every day, and the tumors look and act remarkably like human cancer,” Houvras said. “Combined with other new technologies such as CRISPR-Cas9 gene editing, we have a really flexible set of tools that have developed over the past 10 years that have transformed discovery.”

Melanoma is largely driven by BRAF mutations. The other BRAF-driven cancer is thyroid cancer, which happens to be Houvras’s clinical specialty. It’s also a cancer that has lacked viable alternatives to cell line models; thyroid organoids are nearly impossible to make, and patient-derived xenografts don’t work well in mice. 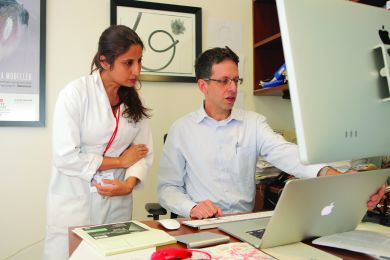 Dr.Yariv Houvras, right, with Dr. Ritu Kumar, an assistant professor of cell and developmental biology in surgery. “But using the zebrafish, we are able to make patient-specific models quickly,” Houvras said. “By injecting patient specific cancer genes we can make a thousand patient ‘avatars’ before lunch. Using these approaches we can do things that were previously almost unimaginable.”

His first objective is to use the zebrafish models to elucidate the biology and mechanism of thyroid cancer.

For instance, it seems that different types of cells handle BRAF mutations differently. Mutations in skin cells lead to deadly disease, while mutations in thyroid cells often lead to indolent, or slow-growing, forms of disease.

“If we can figure out why, perhaps we could convert aggressive cancers into more slow growing indolent cancers that didn’t result in patient death,” Houvras said.

The models could also be used to test new therapies, or guide doctors in treatment decision-making in a very personalized medicine approach to cancer care. By creating fish with tumors taken from individual patients and exposing them to a variety of available drugs, the doctor could get an idea of which drug the patient’s tumor would likely respond to the best.

Houvras’s team has already made some discoveries using the new models. As outlined in a paper published March 28 in eLIFE, his lab documented the mechanism by which a common form of thyroid cancer, papillary thyroid cancer, can transform into a more malignant, metastatic type.

“We showed that the process was driven by the TWIST2 transcription factor,” Houvras said. “Some of that was known, but this allowed us to watch cancer actually happen in a living animal model.”

By identifying this process, the team of scientists in the Houvras lab was also able to identify a gene expression signature which may be clinically relevant in predicting patients who are at risk of disease recurrence. Armed with such knowledge, those patients might want to consider additional treatment options, including drugs designed to target BRAF mutations.

“Part of the art of being a thyroid doctor is knowing when not to intervene,” Houvras said. “Although patients with PTC may be cured with surgery and radioiodine treatment, mutations in BRAF are associated with an increased risk of disease recurrence. Yet many of these BRAF-mutant PTCs are slow-growing cancers that may be clinically stable for years. Identifying these tumors is a key clinical challenge.”

On the Fast Track

Graduate student has cultured an unexpected side passion: Fish