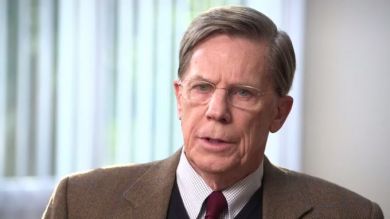 Douglas Fearon, M.D. One of the worst cruelties of lethal cancer is the phenomenon called wasting, or in medical terms, cachexia (pronounced ka-CHEX-ia), in which a patient seems literally to diminish in bodily terms as the cancer ravages one or more internal organs.

A team at Cancer Research UK Cambridge Institute, led by Professor Douglas Fearon, M.D., also of Weill cornell Medicine and Cold Spring Harbor Laboratory, published in Cell Metabolism results of experiments showing that tumors interfere with the patient's ability to cope with wasting and may even impair their ability to respond to immunotherapy.

In mouse models of human pancreatic and colon cancer, the team traces cachexia to a molecular reprogramming of the liver induced by the tumor, the effect of which is to alter the liver's normal response to caloric deficiency. As the caloric deficiency worsens and weight continues to decline, the body responds by releasing stress hormones.  The team found that these hormones, in turn, prevent the immune system from responding to the tumor.

The researchers performed experiments demonstrating that in mouse models of pancreas and colon cancer, liver reprogramming begins during pre-cachexia, when wasting has just begun but is not yet manifest. Signals broadcast by tumor cells induce the release of interleukin 6 (IL-6), a molecular beacon of the immune system called a cytokine, that normally helps induce an immune response. IL-6, in turn, impairs the capacity of the liver to respond to caloric deprivation, which is already under way in pre-cachectic mice.

"Translated into human terms, this means that when a cancer patient loses his or her appetite and decides not to eat, the liver is not going to generate sufficient energy to compensate for the caloric loss," explains Dr. Fearon.

The team's discovery not only sheds light on why conventional caloric supplementation fails to curtail cachexia in cancer patients. It also helps to account for the failure of T-cell checkpoint targeted immunotherapies in pancreatic and colon cancers.  The tumor, in effect, is fooling the immune system into thinking the tumor is not a threat but rather just normal regenerating tissue.

The team tested several ways of addressing liver reprogramming in pre-cachectic mice. Using a mouse model that recapitulates human pancreatic cancer, they administered an antibody that targets and inactivates IL-6; the same mice received massive caloric supplements via infusion.  According to Dr. Flint, "Our data suggest that successful reversal of cachexia in people may well depend on co-administration of anti-IL-6 with nutritional support."

The team also noted that their findings may have relevance in a wide range of IL-6-associated illnesses in which weight loss in observed. These include sepsis, HIV, tuberculosis, chronic obstructive pulmonary disease, cardiac failure and rheumatoid arthritis.