Many of the genetic mutations present in colorectal cancer have been known for decades. But their exact role in cancer’s development and progression has not been clear. “We knew that these mutations existed, but not whether they contribute to the disease,” said Lukas Dow, an assistant professor of biochemistry in medicine and a member of the Sandra and Edward Meyer Cancer Center at Weill Cornell Medicine. “So we are interested in whether they are actually driving cancer and whether they can potentially be targets for drugs that treat it.” 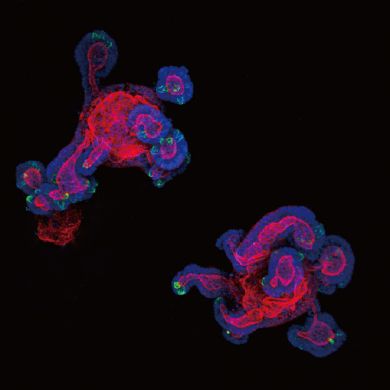 Mouse intestinal organoids that scientists genetically engineered to study colon cancer. Using gene editing technology, the investigators fused together the genes Ptprk and Rspo3 to determine their effect on cancer development. Credit: Teng Han In a paper published July 11 in Nature Communications, Dow and his colleagues describe how large pieces of chromosomes are deleted or inverted, resulting in new, mutated so-called fusion genes created from parts of two other genes that are responsible for the formation of some colon cancers.

The researchers used the gene editing technology CRISPR, which allows scientists to easily alter any piece of DNA in an organism, to cut the DNA in normal human intestinal cells and create fusion genes. In this way, they engineered the genetic mutations in two genes – Rspo2 and Rspo3 – known to be associated with colorectal cancer. They then created mice containing these genes to study the genes’ effect on colon cancer development.

Though CRISPR has received a lot of attention in the last several years, this is the first time the tool has been used this way. “We created the first CRISPR-based transgenic animal model for inducing large-scale chromosomal rearrangements,” Dow said.

These chromosomal rearrangements in the Rspo genes did in fact initiate growth of colon cancer in the mice. The mice containing the engineered genes developed multiple precancerous tumors that are the precursors to colorectal cancer. “This is the first evidence that these specific fusions can drive tumor development,” Dow said.

Dow’s team went on to treat the mice that developed cancer with an experimental drug, LGK974, which blocks a protein necessary for Rspo fusion genes to cause disease. “The tumors shrank and the mice were fine as long as they continued to take LGK974,” Dow said. In addition, the drug only suppressed growth of the cancer cells; it had no obvious negative effect on healthy cells in the mouse intestine.

The study’s results hold particular promise for the treatment of colorectal cancer in humans, Dow said. This form of cancer has historically been a difficult disease to treat. Chemotherapy drugs have limited impact against colorectal cancer and developing targeted therapies – drugs that target aspects of cancer cells that make them different from healthy cells – has proven difficult. “Our results give us confidence that if we can deliver LGK974 effectively to patients with these fusion genes,” Dow said, “then we should be able to see some tumor response with these targeted agents.”