Genetic mutations are a major cause of cancer, and tracking the role of each gene in cancer pathogenesis has long been an important tool in the fight against a disease that is expected to kill more than 1.6 million people this year.

Years ago, scientists developed the method of forward genetics – messages inserted into the genome of fruit flies to identify which genetic changes led to disease. The ability to perform the same type of study on human organs has, to date, been impossible, but a multi-institution collaboration – including researchers from Cornell and Weill Cornell Medicine – has published research on a tissue-engineering method that allows forward genetics screening on human tissue.

The paper, "A recellularized human colon model identifies cancer driver genes," was published July 11 in Nature Biotechnology. Dr. Michael Shuler, the Samuel B. Eckert Professor of Engineering and co-senior author of the paper, described his team's work as "powerful."

"You can't really do experiments very well on human tissue," he said, "so having a human system, which allows you to look at the genetics in the context of a controlled environment, is a fairly powerful technique." 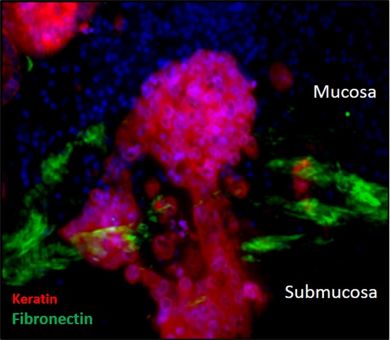 The human colon model devised by researchers at Cornell and Weill Cornell Medicine recapitulated the main features of colorectal cancer progression, from in situ to invasion, in a matter of weeks. The team created a human colon model by first deleting cells from normal human colon tissue, while retaining most of the molecules to which the cells adhere. The tissue is then repopulated with cells obtained from colonoscopy patient samples and from commercial sources.

"What you're really trying to do is provide a micro-environment that encourages the appropriate expression of the genes in the system," Dr. Shuler said.

Then, using a technique developed in the 1990s for inserting specific sequences of DNA into a genome – called a "Sleeping Beauty" transposon – the group tracked the genetic changes that occurred inside the colon model, which were consistent with typical early stage colorectal cancer (CRC).

Further testing confirmed that this recellularized colon model is capable of replicating key features of CRC progression. The work identified 38 driver (disease-carrying) genes, including six that had not been previously implicated in CRC progression.

Dr. Shuler admitted that while it's impossible to say the model provides an exact replica of CRC progression inside the body, "it gives you a human-based system to characterize some of the key steps in advance-stage colon cancer, and that is something that hasn't been possible."

Dr. Nancy Jenkins, professor of oncology at Houston Methodist Research Institute (HMRI) and co-senior author of the paper, said this technique will go a long way toward fulfilling an unmet need in cancer research.

"The recellularized human colon provides an exciting new model for identifying genes that are mutated during the earliest step in tumor metastasis," said Dr. Jenkins, a cancer geneticist. "Our hope is that a better understanding of the genetics of tumor metastasis will lead to better molecular targeted therapies and/or biomarkers for the treatment of colon cancer."

This study could lead researchers to pursue two directions, according to co-first author Dr. Joyce Chen, a former Cornell graduate student in biomedical engineering who is now a postdoctoral fellow working on a new set of problems in the lab of Dr. Harold Varmus, the Lewis Thomas University Professor at the Meyer Cancer Center at Weill Cornell Medicine.

"The first would be to improve our current colorectal tissue model and study the relationship with the immune system," she said. "We could also use this model to investigate the later stage of the disease, and the migration of cells out of the colon tissue and into other organs, such as the liver."

This work was supported by grants from the National Cancer Institute, the National Institutes of Health and the Cancer Prevention Research Institute of Texas.