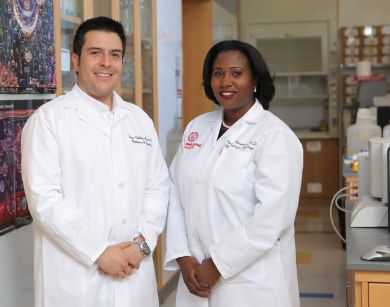 Dr. Eloise Chapman-Davis and Dr. Juan R. Cubillos-Ruiz The promise of immunotherapy is altering how many cancers are perceived and treated, but it has so far eluded the treatment for some of the more aggressive malignancies, including ovarian cancer.

“The same therapeutic approaches for ovarian cancer have been used for the last 40 years, but survival for patients with metastatic ovarian cancer, which is the most common stage at which it is diagnosed, has not substantially improved,” says Juan R. Cubillos-Ruiz, Ph.D., Assistant Professor of Microbiology and Immunology in Obstetrics and Gynecology at Weill Cornell Medicine. “Less than 27 percent of the patients diagnosed with metastatic ovarian cancer will live five years. When patients are diagnosed with localized or primary disease, their prognosis for survival is about 90 percent. The problem is that only 20 percent of the tumors are actually detected at that early stage. The others are detected when the tumor has already spread throughout the peritoneal cavity. At that stage, the cancer cells are refractory to chemotherapy. It’s a very aggressive disease and the progression is extremely accelerated.”

Not Your Average Immunosuppression

For the past decade, Dr. Cubillos-Ruiz has focused his scientific career on understanding why the immune system is unable to control this cancer.

“While immunotherapy is eliciting remarkable responses against some tumor types, the same immune-based approaches are not working well in ovarian cancer or other cancers that are more aggressive,” says Dr. Cubillos-Ruiz. “These tumors, especially in ovarian and pancreatic cancer, are extremely immunosuppressive. They have evolved multiple mechanisms to cripple immune cell functions, inhibiting the capacity of the immune system to eliminate the cancer cells. For example, while checkpoint blockade inhibitors for metastatic melanoma induce significant responses in 30-40% of patients, the same strategy is partly effective only in 10% of metastatic ovarian cancer patients.”

In light of the shortcomings of current immunotherapeutic approaches for these more aggressive tumors, Dr. Cubillos-Ruiz and his research group have been analyzing what transpires in tumors from ovarian cancer patients.

“We are profiling and interrogating the function of those immune cells inside the tumor to understand why they are able to infiltrate the tumor, but not function,” he explains. “What we have found is that they enter into an adverse, very hostile microenvironment in which nutrients are lacking. There’s little glucose. There’s also hypoxia, pH stress, and oxidative stress. We found that this combination of harsh environmental factors provokes accumulation of misfolded proteins in the endoplasmic reticulum [ER] of infiltrating immune cells, thereby inducing a cellular state called ‘ER stress.’ During this process, the IRE1α-XBP1 signaling pathway of the unfolded protein response is aberrantly activated and this ultimately inhibits the development of an effective anti-tumor immune response.”

Cancer cells are known to exploit the IRE1α-XBP1 arm of the ER stress response to efficiently adjust their protein-folding capacity and ensure survival under hostile tumor microenvironmental conditions, says Dr. Cubillos-Ruiz. “However, we found that dendritic cells residing in the ovarian cancer microenvironment also experience severe ER stress and demonstrate persistent activation of the IRE1α-XBP1 pathway."

“The unfolded protein response should be intermittent, activating and then shutting down,” continues Dr. Cubillos-Ruiz. “It should be very specific in terms of time and strength. But the problem is that when this pathway is persistently on it causes immune cell dysfunction. We call this event ‘abnormal ER stress responses’ because the pathway is trying to correct and improve the folding of the proteins, but at the same time is inducing collateral damage in the immune cells.”

Dr. Cubillos-Ruiz and his colleagues turned their investigation to mouse models of ovarian cancer. Making use of elegant genetic systems developed in the lab, they were able to specifically abrogate the IRE1α-XBP1 pathway in immune cells.

“We developed ovarian cancers in mice devoid of ER stress sensors specifically in immune cells to determine what would happen with disease progression in this context,” says Dr. Cubillos-Ruiz. “The immune cells were still able to enter the tumor, but by turning off the genes encoding either IRE1α or XBP1, they did not react to the inhospitable environment. Because they lacked those stress sensors they were refractory to factors that otherwise would inhibit their function, providing them with a more potent, enhanced anti-tumoral function.”

Importantly, Dr. Cubillos-Ruiz notes, he and his research team were able to confirm the mechanistic and functional findings found in the mouse model using human samples from ovarian cancer patients.

“We wanted to make sure that this new process was also taking place in freshly isolated human specimens, and we demonstrated that the ER stress response pathway was indeed active in the immune cells that infiltrated human ovarian tumor cells as well.”

Having described how the previously unrecognized process of ER stress disrupts metabolic homeostasis and antigen-presenting capacity in dendritic cells, Dr. Cubillos-Ruiz and his team now had what they needed to begin pursuing therapeutic implications.

“In our first approach we are developing small molecule inhibitors for ER stress sensor,” he says. “These small molecule inhibitors will bind the sensor, IRE1α, in vivo, in the tumor, and will prevent their activation. We hope that treatment with these inhibitors would mimic what we found in our gene-deficient animals – if the immune cells can’t sense ER stress, they can function better. We are now trying to devise firstin-class drugs that can inhibit the IRE1α-XBP1 pathway in both cancer cells and dendritic cells, which would sensitize the cancer to treatment and restore an immune response against it.”

Their second approach involves nanoparticles that encapsulate small interfering RNA. Dr. Cubillos-Ruiz and his research team have tested a strategy in which mice were injected with nanoparticles he developed. These microscopic polymers encapsulate nucleic acids that can silence the genes encoding IRE1α or XPB1. Dendritic cells in the tumor detect the nanoparticles as invaders and ingest them. Once inside, the nanoparticles deliver the molecule that turns IRE1α-XPB1 signaling off, allowing dendritic cells to instruct the immune system to attack the cancer.

“The nano-particles act like a Trojan Horse, releasing the payload that will turn off the pathway,” he says.

Plans for future approaches also include genome editing. Now that the research team had demonstrated proof of concept in preclinical experiments, their hope is to actualize this in the clinical arena.

“By dissecting the tumors surgically removed from patients, we could isolate antigens that are ovarian cancer-specific,” he says. “At the same time, we would obtain peripheral blood and differentiate the monocytes in vitro into dendritic cells. If dendritic cells do not present antigens to the T cells, the T cells cannot kill the tumor. So what we want to do exploiting new genome-editing tools is delete XBP1 or IRE1α in the lab and then transfer these gene-modifi ed or gene-edited dendritic cells back into the patient. The process is called adoptive immunotherapy. Our hypothesis is that dendritic cells that no longer have XBP1 or IRE1α would function better in the cancer host.”

Closing in on Clinical Applications

Eloise Chapman-Davis, M.D., is a specialist in gynecological cancers in the Department of Obstetrics and Gynecology at NewYork-Presbyterian/Weill Cornell Medical Center. Her passion in bringing advanced medical care to the underserved around the world and patients at home complements Dr. Cubillos-Ruiz’s aspirations to translate his work at the bench into clinical applications, ultimately providing treatment options for ovarian cancer in an area of oncology that to date has had little reason for optimism.

Drs. Cubillos-Ruiz and Chapman-Davis, joined by pathologist Cathleen Matrai, M.D., were recently awarded a grant by Colleen’s Dream Foundation to define the role of XBP1 as a potentially crucial biomarker in the treatment of ovarian cancer tumors. Their research builds on their discovery that IRE1α-XBP1 signaling plays a crucial tumorigenic and immunosuppressive role in ovarian cancer. The investigators will analyze tumor specimens from 200 ovarian cancer patients in a retrospective study, quantifying the expression levels of XBP1 in each of the patient’s tumor samples, then correlating their results to existing patient data with the aim of understanding the protein’s effect in disease progression and therapy engagement. They also hope to establish a new system that reveals which patients are better candidates to receive therapies that target XBP1 and other biomarkers.

“Our goal is to look for biomarkers that will be able to help predict response or resistance to treatment with standard cytotoxic drugs,” notes Dr. Chapman-Davis. “The ultimate goal is to be able to create an immune-based scoring system to identify specifi c patients more likely to be affected. And then, hopefully, we will be able to utilize them to direct treatment with immunotherapy in conjunction with conventional chemotherapeutics.”

Dr. Chapman-Davis emphasizes that the big unknown is identifying which patients with ovarian cancer are going to be the most receptive to the new immunotherapies that are becoming available. “

Our goal is to determine novel immunotherapeutic approaches for treating ovarian cancer, but before we can utilize some of those novel approaches, we need to know which patients will benefi t,” she says. “The problem with ovarian cancer is that while we do a good job of getting patients up-front therapies that can put them into remission, the majority will have a recurrence in a short period of time. And, once they recur, you basically lose your chance for a cure. We’re trying to change ovarian cancer into a chronic disease rather than a death sentence.”

The challenge is further complicated by preexisting levels of immune dysfunction in patients who are already undergoing treatment for ovarian cancer.

“There is a lot of data looking at ways to evaluate T-cell function, T-cell regulation, and tumor infi ltration patterns,” notes Dr. Chapman-Davis. “Through this retrospective study, we are trying to see if we can develop a pattern in patients who show variance of expression of XBP1 and link that to their clinical data. Identifying specifi c features about a particular patient’s immune profi le may help direct patient treatment options and increase the chances that a patient would accept the immunotherapy.”

This article first appeared in the NewYork-Presbyterian publication Advances in Oncology. Read the original here.