Two rising Meyer Cancer Center stars were honored at star-studded event in New Orleans during the 2016 Annual Meeting of the American Association for Cancer Research.

Weill Cornell Medicine researchers Juan Cubillos-Ruiz, Ph.D., and Dan Landau, M.D., Ph.D., were two of 10 young investigators nationwide who received $750,000 Innovative Research Grants from Stand Up To Cancer (SU2C), a charitable program established in 2008 by film and media leaders. Matthew G. Vander Heiden, M.D., Ph.D., a former postdoc in the Cantley Lab who is now an associate professor at the Koch Institute for Integrative Cancer Research at Massachusetts Institute of Technology, also received an award. 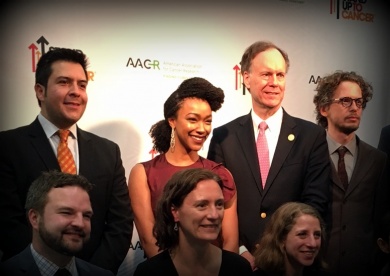 Juan Cubillos-Ruiz and Dan Landau with Sonequa Martin-Green The awards were announced April 18 by Sonequa Martin-Green, 31, an actress and producer who is a main cast member in the hit television show “The Walking Dead,” in which she plays a survivor of the zombie apocalypse. In real life, she has lost several members of her extended family to cancer, and has other relatives, including her mother, who are cancer survivors.

“I have seen the terrible toll that cancer can take in a single family, so I respect and fully support these outstanding researchers in their battle against cancer,” Martin-Green said. “Hopefully the innovative ideas they are pursuing will one day spare other families the losses that my family, and so many other families have endured.”

More than 250 applications were received, from which 16 finalists were chosen to make presentations in person to a committee of senior scientists. 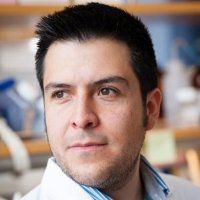 Novel and more effective therapeutic strategies are urgently needed in the clinic to improve the dismal prognosis of ovarian cancer. A form of immunotherapy, adoptive T cell therapy, utilizes immune cells called T cells that are engineered in the laboratory to recognize and eliminate cancer cells. This type of immunotherapy has been used successfully in melanoma patients, however, there has only been partial success in ovarian cancer. This is thought to be because the ovarian tumor microenvironment, the cells and structures that surround and support the cancer cells, work to suppress T cell activity. Preliminary evidence from the Cubillos-Ruiz group has confirmed that dendritic cells, another type of immune cell that is common in the tumor environment, are programmed in such a way that they inhibit T cell function. This proposal aims to understand how dendritic cell signaling is altered in ovarian cancer tumors. Specifically, a novel immunosuppressive pathway driven by a unique class of molecules, called lipid messengers, will be characterized in the dendritic cells of the tumor environment. The hypothesis is that these lipids cause severe immune cell dysfunction which would limit the clinical benefit of adoptive cell therapy in ovarian cancer. Therefore, this proposal will also determine if blocking the activity of these immunoregulatory lipids could provide a new approach to improve the effectiveness of ovarian cancer immunotherapies.

“I lost my grandmother to cancer in 2012, and that was, of course, completely devastating for the family, but to me as a scientist, it was extremely frustrating to realize that what we call modern medicine couldn't do anything to stop the cancer,” Cubillos-Ruiz said.

It will involve a new mathematical approach in designing combination therapy for chronic lymphocytic leukemia (CLL). Landau's lab will genetically engineer CLL cells to recreate the diversity of cancer cell subtypes seen in tumors and will then determine which subpopulations are resistant to treatment with single agents or a combination of agents. They will also screen for genetic differences in CLL cells taken from patients before and during therapy to characterize how cells respond differently to drugs. The measurements from these experiments will enable advanced mathematical models of leukemia growth, taking into account the fact that each population within the leukemia responds differently to different drugs. These data-driven models are expected to generate and optimize patient-specific combination treatment plans.

“The ability to help patients, with therapies, but also, just being there, supporting them, when they go through probably the hardest challenges of their lives, to me is immensely meaningful,” Landau said.

Characterized as “high-risk” projects, they were praised for challengeing existing paradigms and utilizing novel concepts or approaches.

“We have selected 10 scientists and projects that we believe use new insights and fresh approaches and have high potential to make a difference for people with cancer,” said William G. Kaelin Jr., M.D., professor of medicine at the Dana-Farber Cancer Institute in Boston and chairman of the SU2C Innovative Research Grant (IRG) review committee. “Just as importantly, SU2C is investing in the future of cancer research by supporting an outstanding group of early-career investigators whom we believe are rising stars in science.”

The SU2C award was the latest of several that the duo have received recently.

For more about all of the SU2C grants, visit here.