For several years, scientists have known that SIRT6 – one of seven sirtuins, a family of mammalian proteins with important biological functions, including promoting longer, healthier life – is a tumor suppressor. It has been studied in many different types of cancer, but the reasons for its tumor-suppression ability haven’t been understood. 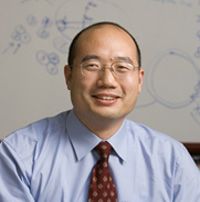 Hening Lin, Ph.D. A Cornell group led by Hening Lin, professor in the Department of Chemistry and Chemical Biology, may have found the answer. It has to do with SIRT6’s ability to remove chemical groups known as fatty acyl groups from the lysine residues of proteins.

Its removal of fatty acyl groups from a known oncoprotein, R-Ras2, prevents a series of events, which when allowed to occur lead to increased cell proliferation. Preventing these reactions slows cell division and, therefore, cancer cell proliferation.

“It turns out that the activity of removing lipid modification is important for the tumor-suppression function,” said Lin, whose group published a paper, “SIRT6 regulates Ras-related protein R-Ras2 by lysine defatty-acylation,” April 13 in the journal eLife. Xiaoyu Zhang, graduate student in the field of chemistry and chemical biology and a member of the Lin Group, is lead author.

This research stems from work the Lin Group published in 2016 in Nature Chemical Biology, in which it attempted to understand how SIRT6’s multiple enzyme activities related to its various biological functions.

In the current work, the group discovered that when R-Ras2 is tagged with the fatty acyl group, it moves to the cell’s plasma membrane. This turns on a cell signaling pathway, which causes the cell to divide more rapidly. SIRT6 acts as a tumor suppressor largely by removing the fatty acyl group and slowing down the growth of cancer cells.

Lin said this discovery could apply to other mutated Ras proteins, including the K-Ras gene, which is found in more than 80 percent of pancreatic tumors.

This work was supported by grants from the National Institutes of Health and funding from the Howard Hughes Medical Institute. Imaging data was acquired at Cornell’s Biotechnology Resource Center Imaging Facility and proteomic data at the Mass Spectrometry and Proteomic Facility.