This is an excerpt of a feature that appeared in Nature Medicine. Read the full story here. 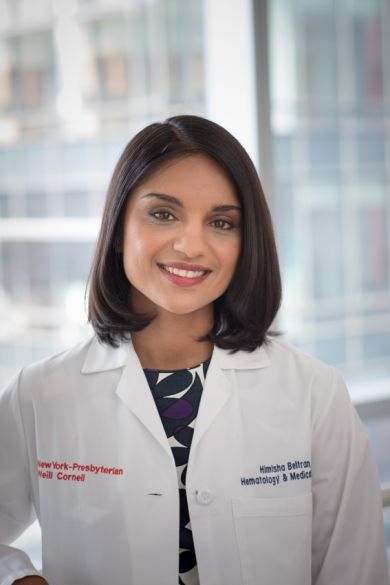 Himisha Beltran, M.D. For Himisha Beltran, the mystery began when she looked into the microscope at cells from a patient who had endured one of the most taxing treatments for prostate cancer. Similarly to many men with an advanced version of the disease, the patient had undergone castration—a dramatic surgical or chemical intervention to thwart the cancer cells by depleting their favorite growth hormone. The cells under the microscope had undergone an unusual transformation.Beltran knew that this could happen in some cases, but she had begun to see it more and more in patients whose disease progressed rapidly and unexpectedly. She wanted to find out more about why, as well as decipher what it meant for her patients.

Castration, whether surgical or chemical, has been the method of choice for treating advanced or metastatic prostate cancer for the past 70 years. Most often, this is achieved through hormone depletion therapy, but the ultimate goal is the same: depriving the body of androgens, such as testosterone, that serve as a lifeline for prostate cancer cells. Although the treatment comes with side effects such as impotence, weight gain, loss of muscle mass and depression, men with metastatic prostate cancer find the treatment worthwhile because it works—at least for a time. “Most patients’ cancers develop resistance to initial therapies that target the androgen receptor,” says Beltran, an oncologist at Weill Cornell Medical College in New York who has been working for eight years on mechanisms of resistance to castration in prostate cancer.

The typical recourse for castration-resistant prostate cancer is yet more hormone-deprivation therapy with higher doses or more potent drugs. But again, most patients’ tumors become resistant. Thanks to an uptick in biopsies and precision-medicine approaches, Beltran says a closer look at these resistant tumors has revealed a part of the problem that has been hidden until recently: some of the cancer cells are switching their physical cell attributes, known as their ‘phenotype.’ “They look different,” she says.

Ninety percent of the time, prostate cancer patients initially have tumors made of adenocarcinoma cells, which are column-shaped cells designed to secrete fluid. But castrationresistant tumors sometimes contain smaller, rounder, hormone-producing neuroendocrine cells. There might also be other visually and functionally distinct cell types, such as stem cells, multipotent stromal cells called mesenchymal stem cells, and small-cell carcinomas, which are commonly found in lung cancer. Beltran and others are finding that these alternative tumor cell types share a genetic history with the adenocarcinoma cells, but have morphed in the face of targeted therapy such as androgen deprivation. “When you target a key driver in cancer, these tumor cells sort of de-differentiate,” she says.

At any point, some of the morphed cells might also be converting back to an adenocarcinoma cell phenotype. “Everything seems to be dynamically regulated, and cells can switch back and forth,” says Alexander Roesch of the University of Duisburg-Essen in Essen, Germany, who studies this process, called phenotypic plasticity, in melanoma, one of several types of cancers that display it. In prostate cancer, once they’ve switched phenotypes, plastic cells do not need as much androgen to survive; some might not need it at all. Their new phenotypes might enable tumor cells to overproduce the androgen receptor, adopt a mutation that makes their growth and survival independent of testosterone or drop the receptor altogether. Beltran wants to pinpoint the molecular changes that make plasticity possible to spare patients from more rounds of a therapy that just won’t work, and to replace it with better drugs.

In a study published in March, Beltran and her collaborators examined genetic differences between tumor metastases from castration-resistant patients with or without neuroendocrine cells1. But surprisingly, there were few genomic changes that could account for the transformation of adenocarcinoma to neuroendocrine cells. “They may look different under the microscope, and act different clinically, but they’re actually the same cancer that is evolving,” Beltran says.