Not just a shot in the dark

In many ways, it’s a science success story: 9-year-old boy with a rare form of brain cancer is treated by one of the world’s leading experts in the disease, who collaborates with a pioneering precision medicine institute to sequence his cancer and create a first-of-its-kind tumor model replica in the lab, allowing for further analysis and treatment testing without risk of harm to the child.

Upon analysis, the physician-scientist discovers a mutation previously not known to be linked to that type of cancer -- and it happens to be in the protein that his colleague has spent a career studying. He contacts the colleague to ask if there is a drug to target the protein, and it arrives the next day. Applied to the tumor model, the drug effectively kills 80-90 percent of the diseased cells.

If only the story ended there.

Unfortunately, although the drug has been approved by the FDA, it cannot be used on the young patient because it has never been tested in children, and the pharmaceutical company controlling the drug is not willing to take the risk.

“We now start the gymnastics of trying to get permission from the FDA based on compassionate use,” said Jeffrey Greenfield, M.D., Ph.D. “We’ve done it before, and it takes anywhere from 3-6 months. This boy doesn’t have 3-6 months.”

Biden invited regional participants to discuss the goals of the “Cancer Moonshot” mission, announced in January by President Barack Obama as a way to accelerate cancer research, foster data sharing and collaboration, and improve patient access to care -- all on a five-year timeline.

Greenfield said his story summed up some of the challenges the nation will face in trying to achieve such an ambitious goal.

“The promise of precision medicine, which is enormous and which we have all bought into, doesn’t deliver in this case,” Greenfield said. “We’ve done all the work that we’ve promised to do, and we still have hurdles. The science is great, the medicine is great, but we’ve got to figure out a way to bridge the chasm between academia, pharma and clinic.”

The future is now 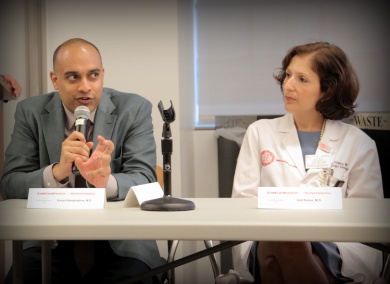 Rohan Ramakrishna, M.D., and Gail Roboz, M.D.. Photo: Ira Fox Greenfield was joined at the event by more than a dozen other distinguished researchers and physicians, as well as a standing-room only crowd of around 100.

Participants heard that in many ways, the future of medicine is already here. Silvia Formenti, M.D., discussed how she uses radiation therapy to turn patients’ own tumors into internal “vaccines,” and Ching Tung, Ph.D., director of the Molecular Imaging Innovations Institute described new ways of “seeing” cancer.

Neurosurgeon Mark Souweidane, M.D., spoke about the importance of developing new forms of drug delivery and working with industry to be able to integrate research and technology into the operating room. His colleagues Susan Pannullo, M.D., and Michael Kaplitt, M.D., Ph.D., explained stereotactic radiosurgery and the use of ultrasound technology to poke holes in the blood-brain barrier.

“These are ways we can use novel non-invasive technologies that will put us as surgeons out of business, unfortunately, but will help heal the world,” Kaplitt said.

Gail Roboz, M.D., director of the Weill Cornell Leukemia Program, described immunotherapy, and in particular the use of CAR-T cells as an emerging therapy.

“The idea isn’t new, “Roboz said. “What’s new is that we can actually do it, we are able to finally do things that were Jetsons level before.”

“In 2016, we are at an amazing inflection point in cancer therapy,” added neurosurgeon Rohan Ramakrishna, M.D. “It’s one thing to say you want to accomplish big change in five years, it’s another to be able to do that.”

But he added that the time it takes to get discoveries from bench to bedside is still too long. We need to innovate, Ramakrishna said, and we need to incentivize high-risk research.

“We know the standard of care is not working in pancreatic cancer; to just keep trying it over and over is basically a practice in insanity,” Ocean said.

She said we should do more to promote ongoing research that may not yet be published but looks promising, in hopes that it might bring more money for research.

“Donors want to fund this kind of work, but they don’t know about it,” Ocean said.

Ramakrishna and Greenfield said we also need to put greater value on the role of physician-scientist, and that the time of all physicians should be better protected so that they spend less time on record-keeping and grant-writing, and more time in the lab and clinic. Tung added that other scientists working in the background – the chemists, computational biologists, and engineers creating some of the new tools that are enabling such progress – should also be supported. 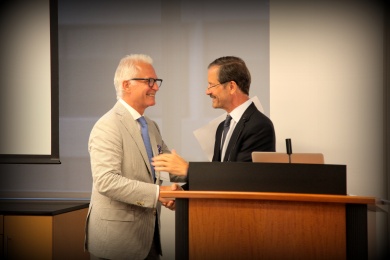 Philip Stieg, M.D., Ph.D. and Lewis Cantley , Ph.D. Biden joined the event briefly via a conference call in which he urged participants to  “push the boundaries of what is possible” and work collaboratively to make it happen.

“At the end of the day someone wants to get the Nobel Prize for curing cancer,” Stieg said. “But that’s counterproductive to what we are talking about.”

Cantley shared examples of cross-disciplinary discoveries made in his own lab, and how the cancer center was working with its partners, such as the Englander Institute for Precision Medicine, on data sharing, institutional tumor banking and computational tools. A video highlighted additional technologies, including the use of the Hololens virtual reality device as a clinical and teaching tool to bring data to life.

Himisha Beltran, M.D., a genitourinary oncologist and clinical director of the Englander Institute, said the challenge is often being able to apply the information gathered from these data points into treatments. Sometimes scientists identify molecular mutations, but there are no known drugs to treat it or, as in Greenfield’s example, the patient cannot access them.

Another gap is in sharing this data, within the hospital network and on a larger scale that would benefit doctors elsewhere, as well as patients who might not have access to large academic medical centers

“We are fortunate here that we have all the resources for our patients, but not all hospitals have that,” Nanus said. “What if you don’t have an expert in house? We need big data that is shared.”

Nanus said he was optimistic that the Oncology Care Model, announced earlier in the day by The Center for Medicare & Medicaid Innovation, would help advance a new way to address cancer treatment, with a central focus on the patient and his/her family. The model encourages and incentivizes patient education, care plans, and survivorship plans, and integrates some of these things into the patient medical records. It addresses psychosocial support issues by prompting doctors to ask questions about depression, pain, and advanced directives.

Getting patients involved in research, however, was identified as a big hurdle.

Pannullo and Formenti said we must facilitate access, and that creative and inclusive trial design is key. Pannullo said patients, clinicians and lab researchers should all be involved in the process. Formenti said study leaders should learn from failures as well as successes, and document why some patients are denied access to trials.

Nanus noted that patients aren’t the only ones who suffer from clinical trial failure – scientific advancement does as well. Pharmaceutical companies may pull their backing from trials that don’t seem to be doing well, and with it research access to the specimens and data collected.

Pannullo said she tries to anticipate future needs and potential hurdles, and has started to build more access clauses into her proposals as a result.

Kaplitt said more should be done to convince pharmaceutical companies that clinical trial support is part of their social obligation, and the cost of doing business.

“Everyone has an investment in this, not just the drug companies,” Kaplitt said.

Many of the panelists also advocated for the cooperative model, where clinical trials are managed centrally and delivered by individual institutions. It has been particularly effective in rare cancers, such as pediatric brain tumors, Stieg said.

Ramakrishna noted that only 1-4 percent of cancer patients eligible for clinical trials are enrolling.

“For us to be successful in testing new therapies, that number is going to have to improve,” Ramakrishna said.

Roboz said many patients are wary of the risk – and the 42-page consent forms.

“We tell patients to be afraid of the disease, not the treatment. But in some cases, we are terrorizing frightened patients with these forms,” Roboz said.

Roboz also said patients face many other small, but significant barriers, such as the cost of parking in Manhattan.

“It’s not just hearing about the trial, understanding it and signing up. Grandma may be willing to participate, but she can’t get to the clinic,” Roboz said. “We could use a little help in tackling the day-to-day issues.”

Ocean said she rarely has trouble convincing her pancreatic cancer patients to enroll in trials.

“They know what the alternative is: death,” she said. 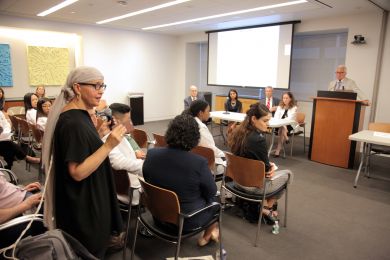 Brain cancer patient Jessica Morris at the NYC regional Cancer Moonshot Summit at Weill Cornell Medicine/NewYork-Presbyterian. Photo: Ira Fox Ocean said one of her main goals as an oncologist is to empower her patients and give them tools to improve the outcomes of their own disease. She recently teamed up with a patient to create a digital platform where patients can share their treatment information. The site – Let’s Win! – shares scientifically-vetted data about approved therapies, emerging therapies, promising trials and recent discoveries, sometimes before they are published, in case the information can offer clinicians additional options to consider when devising treatment strategies.

“It can empower patients to ask the right questions,” Ocean said.

Audience member Jessica Morris said she appreciated such efforts. Diagnosed six months ago with an aggressive brain cancer, Morris said she immediately turned to Google and was barraged by bad news and scary information. She joined several online support groups, and has done intensive research, rapidly becoming an expert in her cancer.

She encouraged the doctors in the room to join such groups as well, to leverage social media and technology, and to embrace a human, patient-centered approach to cancer care.

Morris said she is eager to contribute to research and wishes she had more opportunity to do so.

“I am trying everything I humanly can to combat my cancer – a ketogenic diet, exercise, meditation... But nobody is monitoring all that I am doing. There’s no way to know whether it is helping,” Morris said. “It would be great to create apps where I could log this data in real time, to capture that knowledge.”

“I think we can learn from every patient is some way,” she said.

“Cancer can be inscrutable, incorrigible and inexplicable, and brain cancer perhaps the most complex cancer of all. There is a beauty in facing up to the behemoth and challenging its clever, wicked ways by saying the answer … starts by putting human beings and their 360 degree oneness at the center of the plans of attack, understanding every facet of their experience, and letting mad and meaningful innovation flow.”

Read more about Jessica’s experiences and insights on her blog.