The best chance of survival for those with ovarian cancer is the removal of every bit of their tumors. But such surgical success is rare. Some metastasized tumors are tiny, difficult to detect, and any lesions that the scalpel misses may rapidly –fatally- spread. Surgeons do their best, but they are relying solely on their eyes and experience. 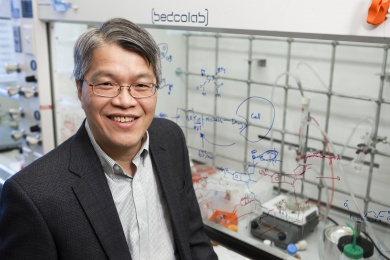 Ching Tung, Ph.D. Ching-Hsuan Tung, Ph.D., thought there must be a better, more scientific, way. So the molecular imaging expert developed a fluorescent “cancer spray” that can be applied to the ovaries and other organs during surgery to create a luminous outline of cancerous cell clusters.

It works by homing in on subtle differences in the microenvironment that surround tumor cells, compared to normal cells.

To maintain their rapid growth and proliferation, cancer cells have a higher need for energy. They consume glucose through a different metabolic highway, and produce lactic acid (rather than pyruvate, as in normal cells). That, in turn, lowers the pH around the cancer cells – between 6.4 to 7.1 in cancer cells, compared to 7.5 around normal cells.

Tung’s compound is non-fluorescent at neutral pH, but fluoresces under mildly acidic conditions, such as those present around cancer cells. It highlights the margins of tumors, making it easy for surgeons to quickly, visually identify them and make clinical decisions accordingly.

It is not the first pH responsive dye to be developed, but previous compounds relied on other targeting ligands or binding substrates that are delivered intravenously. However, some small, superficial tumors, such as those commonly seen in ovarian cancer, have yet to establish independent blood vessels. The intravenously delivered probes would not work well on those small tumors.

This would be the first compound to be applied directly to the surgical area, and its advantages are many, Tung said.

CypH-1 is a single component agent, which is small and simple. Its fluorogenic reaction is nearly instantaneous, and creates a much better signal – a 4-fold difference in fluorescence intensity. Because it is applied locally rather than intravenously, it requires very small doses.

“Any chance for dangerous side-toxicities would be much lower,” Tung said.  “And it is very exciting that the surgeon doesn’t have to wait.”

As the acidic environment is a universal hallmark of cancer, the dye could potentially be used to detect various types of tumors—without the need to create specific tumor-targeting ligands, such as antibodies, peptides or aptamers. Tung’s team has already successfully tested it on several other organs in mouse models. He said it seems to work best on superficial “surface” cancers, such as cervical or colon.

He published a proof-of-concept report in the August issue of Theranostics, and is now in the second phase of real-time validation in animal model and in excised human cancerous tissues. It will likely be several years before CypH-1 is used in operating rooms, but Tung is excited about its potential.

“The simplicity of its chemical structure would make the scale-up preparation economical and the clinical translation more feasible,” Tung said. “Our approach could have a significant impact, and broad surgical and diagnostic applications.”

It is one of many innovations coming out of the labs at the Molecular Imaging Innovations Institute, founded by Department of Radiology in 2013 and housed on the 15th floor of the Belfer Research Building.

There, 30 researchers work on ways to overcome some of the limiting factors of traditional imaging technologies, such as X-rays or MRIs, or on novel approaches to drug delivery.

“The old techniques rely on physics and the physical properties of tissues, but showing density contrasts. Everything you see is in a morphology stage,” Tung said.

“It would be valuable to get biological information as well as physical information, to see the interactive biology of molecules in a disease stage,” he added. “We could see how something is changing, how tumors are growing, and whether drugs are working, in real time.”

A separate EUREKA grant from the National Institutes of Health is allowing Tung’s team to explore exceptional and unconventional sonochemotherapy – drugs that could be selectively activated by locally applied ultrasound.

“There has been a lot of excitement about photodynamic therapy, but that is limited by the ability to deliver light rays, and cannot penetrate thick tissue,” Tung said. “We wondered, can we use a different type of energy to do similar thing?”

His so-called “sound excitable drugs” are not toxic in their native states, but could be converted to deliver cytotoxic treatment to a very specific site. They could provide a safer substitute for conventional nonspecific chemotherapy, which has cytotoxic drugs circulating throughout the body. And since ultrasound is able to penetrate deep tissue without emitting radiation, sonochemotherapy would be an attractive alternative to traditional radiation therapy too, Tung said.

He is currently testing several drugs, and says early results are promising.

Other projects at the institute include nuclear imaging and medicine of prostate cancer, theranostic nanoparticles, multifunctional and multimodal imaging agents, novel delivery vessel for combination therapy, as well as smart probes and drugs that can only be activated by intended biological targets.

“Our recent progresses in molecular imaging and nano-medicine research have created a new wave of medical innovation in medical diagnosis and treatment,” Tung said. 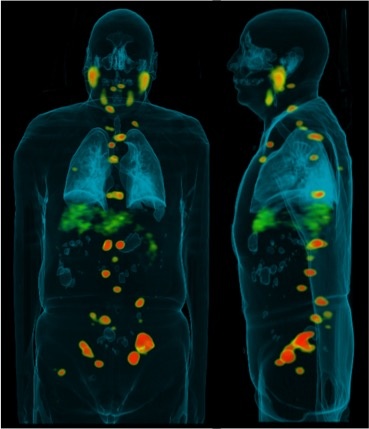