Skin regeneration is product of two types of stem cells 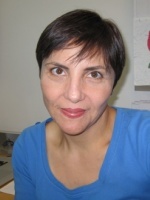 Tudorita Tumbar, Ph.D. Stem cells are essential for tissue regeneration and, in a recent study, Cornell researchers have challenged a long-standing model regarding epidermal stem cells and their role in skin repair.

Researchers in the lab of Tudorita Tumbar, associate professor in the Department of Molecular Biology and Genetics, have a different idea. Tumbar led a study showing the existence of two independent epidermal stem cell populations that divide at different rates, with both contributing to injury repair. The work was conducted on mouse tail skin, which is a useful model system for stem cell research, and preliminary data also implicate the two stem cells in the back skin, which is more representative of human skin.

Their paper, “Defining the cellular lineage hierarchy in the interfollicular epidermis of adult skin,” was published online May 16 in Nature Cell Biology.

Tumbar said this work is a major first step in understanding stem-cell control for skin cell regeneration, with possible implications in cancer prevention and detection.

“Knowing the identity of the skin stem cells, allows examination of how genes function specifically in these cells to maintain normal tissue physiology and how genetic perturbations can lead to disease,” she said.

Tumbar and her group conducted long-term lineage tracing of the stem cells using fluorescent marking within populations of both infrequently dividing, or label-retaining, cells (LRCs) and more proliferative cells (non-LRCs). All of the genetically marked cells’ progeny remain labeled with the fluorescent dye, so the researchers were able to follow their lineage to see if they behaved like stem cells.

“What we found was that there are two populations of epidermal stem cells, one for the LRCs and one for the non-LRCs, and these two stem cells divide at different rates,” Tumbar said. “They’re independent of each other, and they’re localized in distinct areas of the skin, where they may produce distinct differentiated lineages. We think there is more heterogeneity throughout the epidermis than previously recognized, so we’re really trying to focus on this new finding and understand what it means for skin physiology.”

The two separate stem-cell populations were also seen as being able to temporarily replenish each other’s territory in injury conditions.

The group sees a correlation with localization of hair follicles and blood vessels, which are sometimes lost after injury, suggesting a possible physiological connection in organizing the overall structure of this complex tissue.

“By using the new markers and genetic tools provided by this study, we will be able to modify genes of interest specifically in the stem cells to address how their behavior is regulated during homeostasis (normal conditions) and what the outcome is when stem cell function is disrupted,” said co-author Aiko Sada, a former post-doctoral fellow in the Tumbar group, now an assistant professor at the University of Tsukuba (Japan).

This work could also be of value in the study of certain diseases, such as cancer, and how the disease originates or manifests itself in one stem cell population over another. Understanding early stages of disease onset is considered crucial for developing preventive strategies.

“One of the big questions in cancer right now is understanding the cells of origin,” Tumbar said. “It turns out that the same mutations can induce very different outcomes and types of cancers, depending on which specific cells within a tissue they originate in.”

This work was supported by the Empire State Stem Cell Foundation, the New York State Department of Health and grants from the National Institutes of Health.