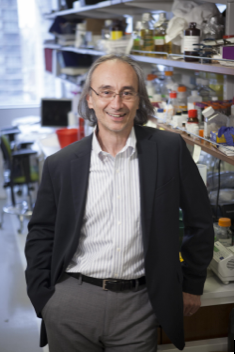 The recruitment of Dr. Blenis is thanks, in part, to a $3 million gift from Susan and Roger Hertog. The Hertogs have a long history of philanthropy with Weill Cornell – having generously supported the last three Campaigns – and chose this recent gift because of its results-oriented focus on cancer research.

In his new role, Dr Blenis will hold the Anna-Maria and Stephen Kellen Professorship in Cancer Research, established in 2012 with a $2 million gift from the Anna-Maria and Stephen Kellen Foundation, of which Overseer Michael Kellen is president. The Kellen family is passionate about cancer research, and they established this professorship to support the recruitment of world class scientists.

Dr. Blenis comes to Weill Cornell from Harvard Medical School. His research strives to identify new biomarkers as well as novel therapies that will not only treat cancer, but may help combat aging, neurodegenerative diseases, diabetes and obesity. He has been recognized with a merit award from the National Cancer Institute at the National Institutes of Health.

“We are thrilled that we played a part in the recruitment of Dr. Blenis, a once-in-a-generation researcher,” says Mr. Hertog. “We have a great deal of interest in the research being done at the Sandra and Edward Meyer Cancer Center, and with his impressive credentials, we know Dr. Blenis will be an integral addition to the center.”

“Dr. John Blenis is a world leader in teasing out the detailed biochemical mechanism by which cancer cells grow,” says Dr. Cantley. “Over the past 20 years, his laboratory at Harvard has uncovered genes that mediate tumor growth and explained the biochemical mechanisms for this control, leading to the development of new drugs for cancer therapy. His addition to the Meyer Cancer Center will provide important leadership in basic and translational research.”

This article first appeared in the September 2014 issue of Milestones magazine.