An existing drug may one day protect premenopausal women from life-altering infertility that commonly follows cancer treatments, according to a new study.

Women who are treated for cancer with radiation or certain chemotherapy drugs are commonly rendered sterile. According to a 2006 study from Weill Cornell Medicine, nearly 40 percent of all female breast cancer survivors experience premature ovarian failure, in which they lose normal function of their ovaries and often become infertile.

Women are born with a lifetime reserve of oocytes, or immature eggs, but those oocytes are among the most sensitive cells in the body and may be wiped out by such cancer treatments. 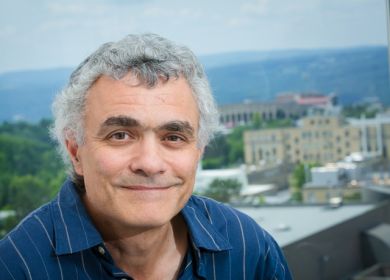 The current study, published Aug. 1 in the journal Genetics, was led by John Schimenti, Cornell’s James Law Professor of Genetics in the Departments of Biomedical Sciences and Molecular Biology and Genetics. It builds on his 2014 research that identified a so-called checkpoint protein (CHK2) that becomes activated when oocytes are damaged by radiation.

CHK2 functions in a pathway that eliminates oocytes with DNA damage, a natural function to protect against giving birth to offspring bearing new mutations. When the researchers irradiated mice lacking the CHK2 gene, the oocytes survived, eventually repaired the DNA damage, and the mice gave birth to healthy pups.

The new study explored whether the checkpoint 2 pathway could be chemically inhibited.

“It turns out there were pre-existing CHK2 inhibitor drugs that were developed, ironically enough, for cancer treatment, but they turned out not to be very useful for treating cancer,” said Schimenti, the paper’s senior author. Vera Rinaldi, a graduate student in Schimenti’s lab, is the paper’s first author. “By giving mice the inhibitor drug, a small molecule, it essentially mimicked the knockout of the checkpoint gene.”

By inhibiting the checkpoint pathway, the oocytes were not killed by radiation and remained fertile, enabling birth of normal pups. 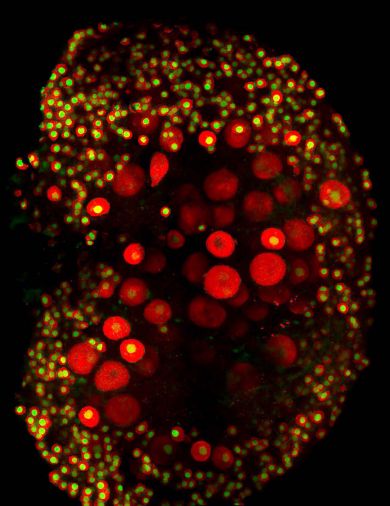 A mouse ovary with proteins specific to oocytes labelled in red and yellow. The study reports that culturing such ovaries in the presence of a drug that inhibits DNA damage checkpoint enzymes protects the oocytes from lethal levels of radiation that would normally kill the entire oocyte reserve.

“The one major concern,” Schimenti said, “is that even though these irradiated oocytes led to the birth of healthy mouse pups, it’s conceivable that they harbor mutations that will become manifested in a generation or two, because we are circumventing an evolutionarily important mechanism of genetic quality control. This needs to be investigated by genome sequencing."

When doctors recognize the need for oocyte-damaging cancer treatments, women may have their oocytes or even ovarian tissue removed and frozen, but this practice delays treatment. Also, when women run out of oocytes, women’s bodies naturally undergo menopause, as their hormonal systems shift.

“That is a serious dilemma and emotional issue,” Schimenti said, “when you layer a cancer diagnosis on top of the prospect of having permanent life-altering effects as a result of chemotherapy, and must face the urgent decision of delaying treatment to freeze oocytes at the risk of one’s own life.”

The study sets a precedent for co-administering this or related drugs and starting cancer therapy simultaneously, though such interventions would first require lengthy human trials.

“While humans and mice have different physiologies, and there is much work to be done to determine safe and effective dosages for people, it is clear that we have the proof of principle for this approach,” Schimenti said.

Ewelina Bolcun-Filas, a former postdoctoral associate in Schimenti’s lab and an assistant professor at The Jackson Laboratory in Bar Harbor, Maine, is the paper’s corresponding author.

The study was funded by the National Institutes of Health.