This is an excerpt of a story that appeared in the New York Post. Read the full article here. 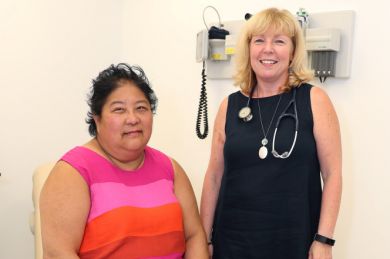 Olivia You Chin (left) and Karen Pekle It wasn’t enough that Olivia Chin was fighting cancer: The lifesaving treatments she needed at NYC’s Weill Cornell Myeloma Center meant traveling for more than four hours from her upstate New York home.

Then hope arrived in the form of nurse practitioner Karen Pekle. Although they’d just met that day in 2011, Pekle told Chin she was welcome to stay in her Upper East Side home during treatments.

“I don’t think it’s that big of a deal,” Pekle, 54, told The Post of her spontaneous offer to a virtual stranger. “I probably said something like, ‘I have a couch you can use.’ But I would have given her the bed.”

Chin, now 60, thought it was a very big deal. When she was diagnosed with multiple myeloma in 2009, she’d been told she had 12 to 18 months to live, and every moment counted. Pekle’s generosity helped keep her going. And while Chin never did take up her offer — the hotel chain Extended Stay America partners with the American Cancer Society to give cancer patients and their caregivers free lodging during treatments — she never forgot her.

When that lodging program, called Hotel Keys of Hope, decided to honor an oncology nurse this year, Chin nominated the woman who went the extra mile for her.

In a ceremony on June 26 in Charleston, SC, Pekle, a native of Ridgewood, Queens, was named Nurse of the Year, from among hundreds of submissions around the country.

It was the first time the American Cancer Society honored a oncology nurse in a nationwide competition.

“We always talk about the [cancer] survivors, but we knew it was time to honor caregivers, especially the nurses who are with patients every step of the way,” said Amanda Kent, social-media coordinator for Extended Stay America, which helped organize the contest.

Being a nurse practitioner is Pekle’s second career. She started off behind the scenes, in cancer research at Memorial Sloan Kettering Cancer Center. In 1991, a doctor suggested she might work really well with patients. Pekle liked the idea of moving to the front lines.

“I wanted to get onto the people side,” said Pekle, who, while single, is close with her two siblings and their children, all of whom live in the tri-state area. “I was tired of being in the lab and being isolated.”

She chose to specialize in multiple myeloma, a particularly deadly form of cancer.

“We take care of patients who are very sick with an illness that is quite challenging,” said Tomer Mark, Pekle’s former clinic partner at Weill Cornell. “Our patients can live for more than a decade. You get to know them very well . . . This is not just a job for Karen. It’s a life commitment.”

Eight years after that awful prognosis, Chin continues to beat the odds. Although she uses a scooter to get around, the retired avionics-software engineer was able to see her youngest daughter graduate from high school two weeks ago. She doesn’t know how she would have made it through without Pekle.