Cancer is a set of diseases in which normal cells undergo abnormal changes in a series of incremental steps that eventually tip the scales toward malignancy. Its treatment may soon require changes as well, as a growing number of patients are tipping their own scales and inducing metabolic changes that affect their risks and responses to therapy.

In a paper published Nov. 7 in the Journal of Clinical Oncology, Weill Cornell Medicine researchers warned that doctors should take into account the physiology of their obese patients when planning their treatments.

Obesity has been identified as a risk factor for several types of cancer, including breast, endometrial, prostate, pancreatic, tongue and colon. Furthermore, obese patients tend to fare worse once they get the disease.

The comprehensive review of research by Lewis Cantley, Ph.D., director of the Sandra and Edward Meyer Cancer Center, and his lab members Benjamin Hopkins, Ph.D. and Marcus Goncalves, M.D., Ph.D., explains several reasons why this may be the case, and why awareness of these biological processes may prove vital to creating more effective treatments for these patients.

Cancer cells are greedy feeders that alter their metabolism in order to meet their insatiable energy demands. Cantley, a leading expert on metabolic signaling networks within the body, explains that obesity is a state of nutrient excess that chronically activates cellular growth factor signaling pathways, therefore increasing the risk of malignant mutations.

“Obesity develops as a result of chronic caloric excess,” Cantley said. “The excess energy is stored as lipid in adipose (fatty) tissue, and may accumulate in other metabolic organs such as the liver and skeletal muscle. An increased amount of lipid significantly alters the normal metabolic milieu and creates an environment that chronically transmits a signal of nutrient excess in the cell.”

This makes conditions ripe for errant cells to nestle in and complete their transformation to malignant cancers. Once there, other metabolic changes that occur in the obese state as a result of increases in fatty adipose tissues may further support their growth, and thereby tumor progression. 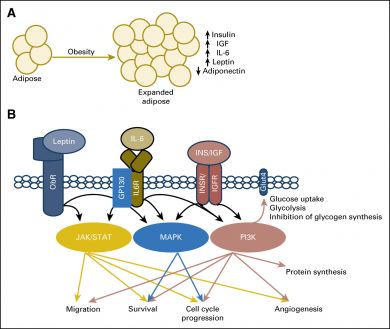 The signaling of obesity. (A) Changes in the size of adipose depots affect systemic homeostasis and lead to increases in insulin (INS), insulin-like growth factor (IGF), leptin, inflammatory cytokines, and result in decreased levels of adiponectin. IL-6, interleukin 6. (B) These signaling molecules activate cell surface receptors and drive signaling through the Janus kinase (JAK)/signal transducers and activators of transcription (STAT), mitogen-activated protein kinase (MAPK), and phosphatidylinositol 3-kinase (PI3K) signaling pathways, all of which are frequently altered in cancer. For instance, fatty adipose tissue produces aromatase, an enzyme that converts androgens like testosterone into estrogen. Excess estrogen can stimulate cellular proliferation, help cancer cells nest into new blood vessels (angiogenesis), and stop the suicide of mutated cells (apoptosis). It’s a particular problem for postmenopausal women with excess adipose, who have been found to be at increased risk of breast and endometrial cancer.

Leptin, which regulates appetite and energy balance, is also found in excess in many obese patients. In the lab, leptin has been shown to activate cell proliferation and survival in cancer cell lines. It is also believed to contribute to inflammation, which adds additional strain and cancer risk. Leptin’s counterpart, adiponectin, can play a protective role by inhibiting cell growth and prompting apoptosis. But many obese patients have low levels of adiponectin, and Cantley suggests that the shift in ratio of these hormones could be a critical change linking obesity and cancer.

Some of the most promising existing and emerging cancer drugs work by targeting metabolic signaling pathways, such as KRAS and PI3K. So if these metabolic pathways are altered in the obese, so too might be the impact these drugs have on these patients. PI3K inhibitors, for instance, can cause excess glucose to enter the bloodstream. The detrimental effects of this would be exacerbated patients with too much blood glucose or insulin resistance.

Adding anti-diabetic medication such as Metformin to the treatment plan might also enhance efficacy. Preliminary testing of these drugs as part of cancer treatment has shown particular promise for gynecologic cancer, but more trials are needed, Cantley said.

“These approaches may have profound effects as cancer prevention as well as enhancing the efficacy of small molecule inhibitors that target insulin signaling,” Cantley said.

“With overwhelming evidence that obesity is a significant risk factor for cancer development, progression, and the patients’ responses to therapy, it is critical to identify new clinical regimens that reduce the negative impacts of this all-too-common metabolic state.”