This is an excerpt of an article that appeared in Targeted Oncology. Read the full story here. 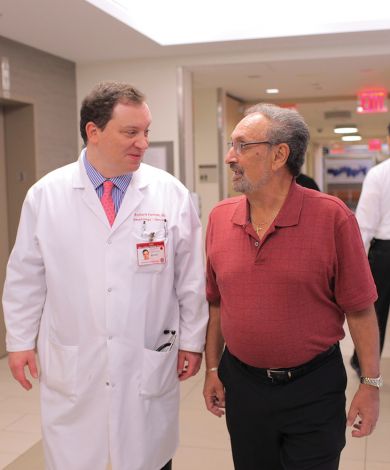 New lease on life: Bob Azopardi with his oncologist, Dr. Richard Furman. When Richard R. Furman, M.D., presented a “How I Treat” session on chronic lymphocytic leukemia (CLL), he emphasized clinicians’ expertise and autonomy, noting that FDA approval of any drug is based on a review of the trials submitted to earn that regulatory decision.

“Once a drug is approved, we can use it, as needed, to help our patients,” he said. “An FDA approval is not a treatment recommendation.”

Furman, director of the CLL Research Center at Weill Cornell Medicine and New York-Presbyterian, made these remarks during the 2016 Annual ASH Meeting on Hematologic Malignancies. In an interview with Targeted Oncology, he emphasized that physicians should follow their best independent judgment regarding therapy selection in CLL. This led with venetoclax (Venclexta), which received FDA approval in 2016 for relapsed patients with del 17p CLL. “If you have a patient with CLL of any type and you believe venetoclax is best for [that patient], you absolutely should use it,” he said. “There’s nothing about the specificity of the FDA approval that should prevent you. Insurance coverage may be another matter, but clinically speaking, you’re on solid ground.”

Physicians should also consistently view treatment recommendations through the lens of progression-free survival (PFS), he added. “Hands down, PFS is the single most important thing to patients,” Furman said. “As oncologists who must balance many clinical concerns, it can be easy for us to forget that fact.”

There are a plethora of agents available as treatments for patients with CLL, Furman explains, with ofatumumab (Arzerra), venetoclax, and frontline ibrutinib (Imbruvica) also being approved in 2016. Others in the armamentarium included idelalisib (Zydelig); obinutuzumab (Gazyva); fludarabine, cyclophosphamide, and rituximab; bendamustine; alemtuzumab (Lemtrada); and chlorambucil.

Furman said that physicians often prefer to use ibrutinib with an adjuvant agent. “Some people always want to include chemotherapy, no matter what,” he added. However, to support evidence of efficacy of ibrutinib as a single agent, he referenced Hillmen et al’s 2015 paper in Blood, which compared single-agent ibrutinib, bendamustine plus rituximab (BR), and ibrutinib plus BR in previously treated patients with CLL and small lymphocytic leukemia.1“Ibrutinib did just as well as a single agent, but there is a lot of bias in favor of using chemotherapy,” he said.

Furman also discussed ibrutinib’s 3-year PFS data, noting that 5-year data will be presented at the 2016 ASH Annual Meeting in December. “The data look the same: the PFS line is flat, but at nearly 100%—except for the 17p del patients whose PFS is trending downward,” he said.

A discussion about treatments for CLL/SLL

Role of Transplantation in High-Risk CLL

Prognostic factors and the impact of new therapies for CLL