How do the bacteria swimming inside and around our guts change our chances of developing cancer? What effect might they have on the immune system? And what happens when you introduce antibiotics or anti-inflammatory drugs?

Studies conducted at Weill Cornell Medicine are exploring these questions in an attempt to better understand the complex workings of the gastrointestinal microbiota and metabolome.

By conservative estimates, around 20 percent of all malignancies may be attributed to microbiota. The mere presence of these bacteria, much less infection, can cause chronic inflammation and further influence immune response to create a proinflammatory microenvironment for cancer development, especially in the gastrointestinal (GI) tract. 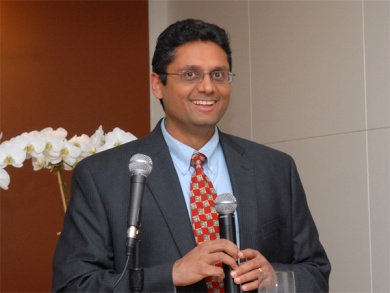 Manish Shah, M.D. “Immunotherapy for colon cancer is less efficacious than in non-GI tract cancers, possibly due to the interaction between the microbiota and the immune system,” said Manish Shah, M.D., the Bartlett Family Associate Professor in Gastrointestinal Oncology.

So he teamed up with gastroenterologist Felice Schnoll-Sussman, M.D., and computational biologists Doron Betel, Ph.D., and Chao Zhang, Ph.D., to begin a systematic computational study profiling the microbiome and evaluating the relationships among microbiome composition, host immune response and genomic characterization.

The group presented their initial results April 19 at the Annual Meeting of the American Association for Cancer Research (AACR).

H. pylori (Helicobacter pylori) is a common bacteria found in the digestive tracts of two-thirds of the world’s population that can cause chronic inflammation, leading to ulcers or cancer.

It often takes decades for cancer to emerge, so there is a long window in which to intervene; understanding the role the bacteria may play could help scientists devise new prevention and treatment strategies.

“We are looking to identify bacteria that are common across groups, and those that may be unique. There seems to be less diversity in the microbiome of those with H. pylori infection – the implications of this we do not know yet,” Shah said. “Once we clear up the infection, does it become more diverse again? Some patients never clear the infection and it becomes chronic. Is this a trigger for cancer, either on its own, or in cooperation with other bacteria?”

As part of the study -- funded by the Starr Cancer Consortium, DeGregorio Family Foundation, and NewYork-Presbyterian Center for Advanced Digestive Care -- 200 patients will be tested. The group also hopes to re-test infected patients a few months after treatment with antibiotics, as well as cancer patients who have undergone immunotherapy treatments such as PD-1 inhibitors, to see how the microbiome composition changes and how it may influence therapy.

They are also analyzing immunological data they were able to collect using the mucosal biopsies – an exciting and new ability, Shah said.

“There seems to be an activation of T-cells, and some downstream effects,” Shah added. “We want to tease out the link between the microbiome and cancer, as well as causal immunity and tumorigenesis.”

NSAIDing to abet the attack 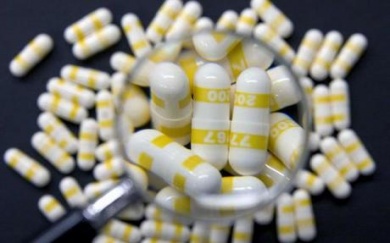 Meyer Cancer Center researchers are exploring the effects of Celecoxib on the microbiome and metabolome A separate study by David Montrose, Ph.D., Xi Kathy Zhou, Ph.D., Steven Gross, Ph.D., and Andrew Dannenberg, M.D., also presented at AACR, explored the effects that certain drug treatments have on the microbiota.

Celecoxib is a nonsteroidal anti-inflammatory drug (NSAID) that inhibits COX-2, an enzyme responsible for making prostaglandins that contribute to inflammation and pain. It is used to treat common conditions such as arthritis.

The Dannenberg team wanted to delve deeper into how the drug works to reduce polyp burden and prevent cancer.

In addition to its chemopreventive activity, celecoxib is believed to have anti-microbial activity. Furthermore, colon cancer patients have been reported to have a different bacterial profile than healthy controls. The Weill team wondered if celecoxib may be mediating its chemopreventive effects, at least in part, by altering the bacteria inside the intestine and the small molecules they produce.

So they tested the feces of drug-treated mice and found a reduction in several metabolites associated with cell proliferation, such as glucose, amino acids, nucleotides and lipids.

“The drug profoundly altered the luminal microbiota and metabolome, and many of the small molecules that were reduced by celecoxib have previously been implicated in cancer,” first author Montrose said.

They also found that intestinal stem cell proliferation was reduced in association with these changes. With fewer of these cells replicating, this could explain why celecoxib is able to reduce the development of polyps, or at least slow their onset, given the known importance of stem cells for gastrointestinal cancer development.

The team will continue to explore the stem cell connection, whether certain metabolites are more critical for the drug’s success, and how the findings play out in the human body.

But the implications could extend beyond just celecoxib, says Montrose.

“Do other drugs of the same class have similar effects? With millions of people walking around taking aspirin and related NSAIDs, it would be good to know whether these drugs are altering their microbiota.”

And if it is found that shifting metabolites to create inhospitable environments for tumors is key, would it be possible to also do so via diet, or cocktails of bacteria?

“Drug pressure on the internal ecosystem is a novel concept,” Montrose said. “It could open up a new avenue to approach chemoprevention.”