Juan Miguel Mosquera Weill Cornell Medical College investigators tried to validate a previously reported molecular finding on triple negative breast cancer that many hoped would lead to targeted treatments for the aggressive disease. Instead, they discovered that the findings were limited to a single patient and could not be applied to further clinical work. This discovery, published April 15 in Nature, amends the earlier work and underscores the importance of independent study validation and careful assay development.

The earlier — and now dispelled — study, published in Nature in June 2012 by researchers at the Broad Institute of MIT and Harvard, found a gene fusion in a small but significant number of tumor samples from patients with triple negative breast cancer, a particularly deadly subtype that often has few treatment options. The original research team concluded that MAGI3-AKT3 fusion could offer a new molecular target to use for drug development.

Soon after this study was published, a Weill Cornell team led by Drs. Mark A. Rubin, Sandra J. Shin and Juan Miguel Mosquera, set out to determine if and how often the gene fusion occurred in Weill Cornell's own collection of triple negative breast cancer samples. 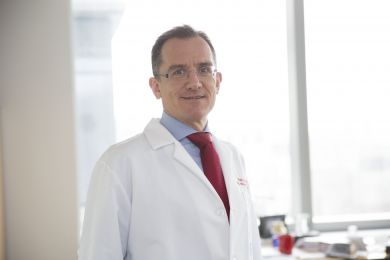 "Large genomic studies are reporting reams of new mutation data, and some are short on validation," said study co-senior author Dr. Rubin, director of the Institute for Precision Medicine at Weill Cornell and NewYork-Presbyterian Hospital.

"The finding of MAGI3-AKT3 fusion by respected researchers and published in a top journal offered great hope and a sense of excitement about developing a new therapeutic target for triple negative breast cancer," said Dr. Shin, the co-senior author of the study, who is also the chief of breast pathology and an associate professor of pathology and laboratory medicine at Weill Cornell Medical College.

"We clarified that the initially reported mutation was not recurrent and with the exception of one case, was an artifact," said Dr. Mosquera, an assistant professor of pathology and laboratory medicine at Weill Cornell Medical College and pathology leader of the Institute for Precision Medicine. "Our work highlights that pathology is essential for verification in this type of scenario. The initial finding has to be amended and our study acknowledged."

To fully correct the MAGI3-AKT3 fusion finding, the Weill Cornell team went through a lengthy process that started with screening 150-plus in-house samples. They expected to find that about 7 percent of them contained the gene fusion, as was the case in the original Nature paper, but instead found zero matches. They noticed that the original tumors studied in 2012 — save the index case — were never verified to have this alteration at the genomic level. Instead, the initial team of researchers had used a screening test on RNA and based on these findings, made the assumption that additional tumors also had the mutation.

The Weill Cornell team further tested more than 100 additional samples from The Cancer Genome Atlas and University Hospital Zurich. They were also unable to confirm the original finding in these cases.

Sandra Shin They communicated their results to Nature and to the Broad Institute investigators almost two years ago, leading those researchers to reanalyze their 72 patient samples, plus an additional 370 breast tumors. When they went back and re-tested the samples at the DNA level, they found the gene fusion only in the first case that triggered this longer study, making it an isolated finding that cannot be applied to develop future clinical trials.

The Weill Cornell team agrees that the MAGI3-AKT3 fusion finding should have been validated at the genomic level before those results were ever published.

"Our study demonstrates the important process of biomarker development and addresses an important point in precision medicine," said Dr. Rubin, who is also the Homer T. Hirst III Professor of Oncology in Pathology at Weill Cornell.

"It is gratifying to know that our results have saved many investigators time, effort and resources toward a goal that was ultimately not achievable," Dr. Shin said. "Just as importantly, patients have been spared from participating in a clinical trial that could not have led to a positive result."