Researchers have developed a clearer understanding of how telomeres, the protective caps at the tips of our chromosomes, are produced. Understanding this process, part of which is clarified by Weill Cornell Medical College scientists in a new study, helps to shed light on how it could be disrupted in the case of cancer cells, which require adequate telomeres for uncontrolled proliferation.

Telomeres are synthesized by two different biological machines. The machine that makes the G-strand of telomeres, called telomerase, has been widely studied and is reasonably well understood. (Drugs that inhibit telomerase are in clinical trials for treating a variety of cancers.) But little is known about how the other machine, called Pol α accomplishes the task of making the C-strand of telomeres.

The new study, published in Nature Communications on Dec. 12, investigated how the protein complex CST — abbreviation for CDC13-STN1-TEN1 — regulates Pol α. It found that CST converts Pol α into a more efficient machine, enabling it first to make a short RNA, and then shuttle the RNA into a different part of the machine, where DNA is attached. Additionally, investigators — who included scientists at Memorial Sloan Kettering Cancer Center and University of Texas Southwestern Medical Center – pinned down the one protein in the CST complex that stimulates telomere production: namely STN1. 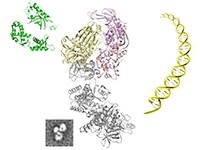 "This represents a significant advance for the field. Now we can really try to dissect the process of C-strand synthesis, and eventually we can hope to put both telomerase and Pol α together and have a good understanding of how the full process of telomere extension is accomplished," said Dr. Neal Lue, a professor of microbiology and immunology at Weill Cornell and the lead author on the study. Other investigators include Jamie Chan of the same department at Weill Cornell, Dr. Jerard Hurwitz of Sloan Kettering, and Dr. Woodring Wright of the University of Texas Southwestern Medical Center.

While the researchers conducted their initial experiments using CST and Pol α from a fungus, Candida glabrata, they later carried out the same experiments with human STN1 and arrived at identical results. Even when they replaced some of the proteins in one organism with those from the other, the same reactions occurred. These surprising results demonstrate how well preserved both the shape of the proteins and the telomere production process have been throughout evolution, Dr. Lue said. They also constitute a powerful reminder of how fundamental research in "model organisms" can contribute to insights on human health and disease.

With an increasingly detailed picture of telomere DNA synthesis, scientists may ultimately be able to disrupt multiple steps in this process simultaneously, and having this ability could bring about more effective cancer treatments in the future.

"We've figured out how important this interaction between STN1 and Pol α is," Dr. Lue said. "The natural thing to do from this point on is to understand precisely how these proteins fit together, and to identify compounds that disrupt this interaction. With some luck, such compounds could eventually be developed into drugs for cancer therapy."