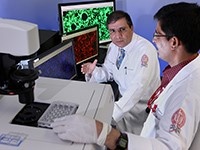 Dr. Lofti Chouchane and Dr. Konduru Sastry Researchers at Weill Cornell Medical College in Qatar have made a major step towards understanding why certain cancers often recur after they have been treated with conventional therapies.

The research, published in Cell Death and Differentiation, a Naturepublication, focused on the role of a protein, appropriately named "BAD protein," in the survival and renewal of some cancer cells. These cancer stem cells are able to resist even the most advanced anti-cancer drugs available.

"The problem with existing cancer treatments is that they can target and kill most of the cancer cells, but they are not able to target the cancer stem cells," said Dr. Lofti Chouchane, a professor of genetic medicine and immunology at WCMC-Q, who led the project.

"These cancer stem cells are only a small proportion of the total number of cancer cells, but they are very important because they are able to sustain tumor growth, which means the cancer comes back."

BAD stands for "Bcl2-Antagonist of cell Death," and Bcl-2 refers to the name of the gene that encodes the protein. The protein is known as an "antagonist of cell death" because in a different form it actually helps to kill cancer stem cells. When it undergoes a common molecular process called phosphorylation, however, its properties change and the protein helps the deadly cells to survive.

"We were able to show that the BAD protein not only plays a role in the survival of cancer stem cells, but that it is actually essential for their survival," Dr. Chouchane said. "This makes BAD an extremely attractive target for research for new, more effective cancer therapies."

Additionally, the researchers discovered a positive correlation between BAD and prostate cancer progression, which suggests BAD plays a role in tumor advancement as well as tumor initiation. This means that future research could use BAD to develop a new way to monitor tumor progression as well as cancer therapies.

"This study represents an important milestone in our understanding of cancer eradication and promises new therapeutic avenues," said Dr. Khaled Machaca, associate dean for research at WCMC-Q. "It is very encouraging and rewarding to have such important findings as the fruits of a multi-institution collaboration among multiple entities within the Qatar Foundation family. This fits squarely within the vision of the QF leadership to encourage collaborative efforts among research-focused institutions in Qatar. Such a collaborative effort between WCMC-Q, QBRI and Sidra offers a shining example of how successful such collaborations can be."