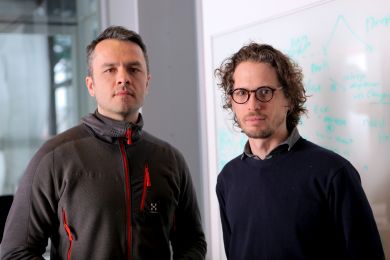 The researchers—Marcin Imielinski, M.D., Ph.D., an assistant professor of computational genomics, and Dan Avi Landau, M.D., Ph.D., an assistant professor of medicine and of physiology and biophysics—met several years ago as postdocs at the Broad Institute, a multi-institutional biomedical and genomic research center affiliated with Harvard and MIT. Last year they were recruited by WCM and the independent, nonprofit New York Genome Center— which, like the Broad, is multi-institutional and collaborative in nature—to continue their work in New York.

While Imielinski is focused on building new algorithms and tools to better understand complex genomic data derived from solid tumors, Landau uses existing ones to study cancer’s genesis and persistence.

“We’re interested in questions that are very complementary,” says Landau. Adds Imielinski: “There are so many aspects of cancer genomics waiting to be explored.”

Imielinski, who came to WCM in July 2015, is a computational biologist with a medical specialization in pathology and a background in computer science. As a member of the Caryl and Israel Englander Institute for Precision Medicine and the HRH Prince Alwaleed Bin Talal Bin Abdulaziz Alsaud Institute for Computational Biomedicine, he is trying to improve the quality of information that scientists can obtain after sequencing malignancies. While investigators have gotten fairly good at detecting and understanding small-scale changes that occur in tumors— like minor typos and single-phrase deletions in the genome—he is most interested in the more complicated, and less understood, large-scale tumor variations. These include changes that occur when 100 million letters are deleted or amplified in a person’s genome, or whole pieces of genetic code are rearranged.

“It’s like editing a Word document and moving paragraph one to page three,” he says.

This type of change can likely help cancer evolve in different ways than those little typos, but scientists still don’t understand this phenomenon well. To understand today’s sequencing and analysis capabilities, Imielinski says, it helps to think of a tumor as being a document whose blocks of text have been haphazardly shuffled out of order, with individual letters changed or deleted. When this document is sequenced, instead of clearly showing where these changes have taken place, the genetic code is spit out in hundred-letter fragments that need to be pieced back together.

“These reads give us a very short-sighted, myopic picture of the overall genomic structure,” Imielinski says. “Yes, it’s a detailed piece of the picture, but it’s not enough to make any sense of the whole.”

With new algorithms that Imielinski is working on now, the goal is to piece together larger and larger blocks of text, and learn more about the mechanisms by which cancer progresses.

As an oncologist, Landau—who earned his doctorate in Paris and did his medical training in Israel, where he spent four years as an Air Force physician—builds on what’s uncovered when a tumor is sequenced, and investigates the intricacies of how cancer evolves.

“Once we know as much as we can about what’s occurring within a patient’s disease, I investigate how we can overlay that genomic map with an evolutionary tree of their cancer,” he explains. “I want to see what mutations came first and which ones came later—and with this information, determine how to best optimize treatment.”

As part of this work, Landau—who joined WCM in November 2015 and, like Imielinski, is a member of the HRH Prince Alwaleed Bin Talal Bin Abdulaziz Alsaud Institute for Computational Biomedicine—is among the first to study how one tumor can have various types of cells, each with its own evolutionary path and methods of adaptation.

“As these malignant populations grow, they become very diverse,” Landau says, “and all of these individual cell populations work together to find ways to grow faster and overcome therapy.” We now know that even within one patient, cancer is never a single disease, he says, but a multitude of diseases that all require targeted treatments.

To extend this research, Landau is studying individual tumors before treatment, to try to predict what genetic changes might take place during and after it. He’s also creating tumor clones, and studying how different cell populations respond to combination therapy in real time, with the goal of developing more individualized treatments.

“Right now, our one-size-fits-all approach to therapy would be like giving a type 1 diabetic a constant dose of insulin without first checking their glucose levels,” Landau says. “We want to take the personalized, real-time approach used in diabetes and realize that vision in cancer care.”