A protein that normally exists in the mitochondria of healthy cells appears to travel to the nucleus of cancer cells and promote metastasis, according to new research from Weill Cornell Medicine investigators.

Nancy Du, Ph.D. The protein, Bcl-xL, exists in the mitochondria of cells. It has long been known that Bcl-xL's primary function is to prevent cell death, known as apoptosis. Cancer cells have an even higher amount of Bcl-xL than healthy cells, so scientists thought that the protein was helping cancer cells to survive. But in their study, published Jan. 20 in Nature Communications, investigators demonstrate how Bcl-xL actually promotes the spread of cancer independent of its anti-apoptotic function. Their unexpected findings may explain why medications targeting Bcl-xL and designed to spur cell death are ineffective in halting cancer progression.

"We were very hopeful about these drugs," said senior author Dr. Yi-Chieh Nancy Du, an assistant professor of pathology and laboratory medicine at Weill Cornell Medicine. "But the results in clinical trials have been disappointing. The drugs were not working like we expected." 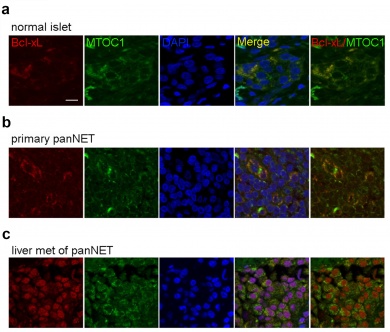 Dr. Du’s study found that the protein Bcl-xL (red), which normally exists in the mitochondria of healthy cells, travels to the nucleus (blue) of cancer cell's nucleus and promotes metastasis. The images in Row A (from left) represent Bcl-xL, mitochondria (green), cell nucleus, Bcl-xL in the mitochondria, and the protein immersed in mitochondria (greenish yellow) in healthy cells. Row B represents the protein’s location and number in primary pancreatic tumors. Row C represents Bcl-xL in metastatic pancreatic tumors; the investigators detected Bcl-xL that had traveled to the cell’s nucleus (purple) in the metastatic tumor. Image credit: Dr. Yi-Chieh Nancy Du/Nature Communications In order to determine why this is, Dr. Du and colleagues from Weill Cornell Medicine, Memorial Sloan Kettering Cancer Center, and Baylor College of Medicine utilized mutant versions of Bcl-xL that did not prevent cell death. They placed these proteins into pancreatic and breast cancer cells, and tested them in Petri dishes and in mice. The cancers metastasized in all cases. "It was clear that the anti-apoptotic function of Bcl-xL was not what was causing metastasis," said Dr. Du, who is also a member of the Sandra and Edward Meyer Cancer Center at Weill Cornell Medicine. "It's totally independent. This is a different biologic function of this protein."

Dr. Du's team is optimistic that their findings will be applicable to many types of cancers. "Metastatic disease occurs in many cancers and it accounts for 90 percent of deaths in patients with solid tumors," Dr. Du said. "Understanding the molecular mechanisms underlying metastasis will help us save these patients."

Dr. Du will also be recognized by the President's Council of Cornell Women with an Affinito-Stewart Grant.