By the time most kidney cancer patients are diagnosed, their disease is in a late stage, and difficult to treat. Researchers at the Sandra and Edward Meyer Cancer Center have identified a gene that may provide a new, super specific target for drugs that could stop kidney cancer progression in its tracks, offering new hope to the 50,000 Americans diagnosed with renal cell carcinoma each year.

The lab of Lorraine Gudas, Ph.D., the Revlon Pharmaceutical Professor of Pharmacology and Toxicology at Weill Cornell Medicine, was investigating the altered metabolic pathways of kidney cancer. They were analyzing a specially designed mouse model, the TRACK model (see related story below), when they came across a particular gene that was highly expressed in the cancerous cells.

The NADH Dehydrogenase Ubiquinone 1 alpha subcomplex 4-like 2 gene – NDUFA4L2 for short – was expressed at high levels in the cancer cells in the mice, but was undetectable in normal kidney and in other tissues. The team then tested healthy human kidney tissue and analyzed data from several databases of human cancer cells to see if there was a discernible difference.

As reported in a paper published Jan. 18, 2016 in Clinical Cancer Research, they found NDUFA4L2 expression was more than 50 fold higher in cancerous tissue compared to healthy kidney tissue, and that the TRACK mouse results seemed to be echoed in the human data. To further test this, they obtained human tissue samples from patients who underwent nephrectomies at Weill Cornell.

“We were actually surprised about it. The fact that this protein is so overexpressed in all of these human tumors suggests that it is playing a major role in tumorigenesis (cancer formation), so you would think that there would be more attention paid to it. But there’s not much known about the NDUFA4L2 protein,” Gudas said. “We really are in a fairly new area in studying this protein.” 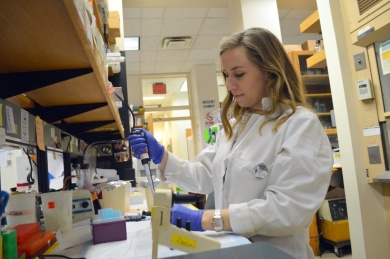 Denise Minton, Ph.D., helped discover a gene that may be a hallmark of kidney cancer, and potential target for new therapies To understand more about the functional significance of the gene, Denise Minton, Ph.D., a former graduate student who is now a postdoctoral fellow at New York University, created human clear cell renal cell carcinoma (ccRCC) cell lines without NDUFA4L2. The tumor cells without NDUFA4L2 stopped dividing and did not form colonies characteristic of cancerous cell proliferation.

Minton delved deeper into the metabolomics to learn that the NDUFA4L2 gene mediates the cellular shift to glycolysis for generating ATP, a crucial step for the cancer in its attempt to take in enough nutrients and generate the DNA and RNA needed to produce new cells. And it also seems to play a role in the structure of mitochondria – the organelles that keep cells full of energy.

“Clear cell renal cell carcinoma is characterized as a highly metabolic disease and alterations in metabolism are likely to be fundamental to the development of advanced ccRCC,” Minton said. “Thus, targeting the metabolic basis of ccRCC could be an effective strategy for treating the disease.”

Gudas acknowledged that more study is definitely needed before drugs targeting NDUFA4L2 are identified and tested in the clinic.“We don’t know enough about what it does, and we need to learn more about how to inhibit it,” she added.

But, she said that targeting NDUFA4L2 for inhibition to treat ccRCC would have several advantages. To start, treatment would be highly specific, as NDUFA4L2 is frequently and highly expressed in cancerous cells, but not in healthy kidney tissue, nor in other tissues in the body. Secondly, inhibiting its function should not disrupt glycolysis in normal cells, which is a risk when targeting other genes involved in glycolysis of cancer cells – many encode enzymes that also play critical roles in healthy, normal cells, and thus could harm them too.

“There’s a potential to have a drug that would damage kidney cancer cells without any other collateral damage to other tissues,” Gudas said.

The clinical significance could be great. Gudas’s team, which included Weill Cornell pathologist Maria Shevchuk, M.D., and clinician David Nanus, M.D., also analyzed patient data and found that those with the highest levels of NDUFA4L2 expression tended to have worse prognoses – a median survival of 1,111 days (three years) compared to 2,454 days (6.7 years) for those with lower expression.

Current ccRCC treatments focus on altering the vascular (blood vessel) system of kidney tumors, primarily by targeting VEGF (vascular endothelial growth factor), and have limited success in cases where the cancer has begun to spread to other organs. Adding another tool to the arsenal would be of great benefit to these patients, according to Nanus, the Mark W. Pasmantier Professor of Hematology and Oncology in Medicine, Chief of the Division of Hematology and Medical Oncology, and Associate Director of Clinical Services for the Meyer Cancer Center.

“Data from our group and others show that in many respects kidney cancer results from altered metabolism. Identifying a novel target such as NDUFA4L2 will assist in developing new therapeutic agents to target this protein,” Nanus said 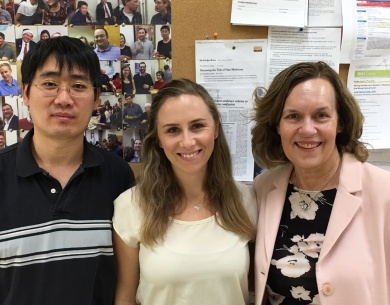 Leiping Fu, Denise Minton and Lorraine Gudas Researchers trying to understand renal cancer in a living environment have been hindered by a lack of model systems that truly mimic the human tumor microenvironment. The closest they came were murine “xenografts,” in which human tumor cells are transplanted into immunocompromised mice that do not reject human cells.

The development of the TRACK mouse (TRAnsgenic model of Cancer of the Kidney) has provided a big boost to scientists in the Gudas lab, with the recent NDUFA4L2 findings one of many discoveries to emerge in the five years since the creation of the TRACK model.

He reported the generation of a transgenic mouse model of von Hippel-Lindau (VHL) renal cancer, one of the most common forms of the disease. He did so by mutating HIF1 alpha (hypoxia-inducible transcription factor) to make it active all of the time, which helps cancer cells metabolize glucose in order to cope with reductions in oxygen availability and consumption.

A hallmark in many cancers, HIF1 alpha drives tumor progression in renal proximal tubules, part of the kidney’s duct system. By altering it, Fu was able to recreate many features of human renal cancer in the mouse. Its tubular structures get distorted, cell cytoplasm and lipid deposition are altered, and cysts form. It also results in increased cell proliferation, angiogenesis, genomic instability, and other phenotypic alterations characteristic of human cancers.

“It really looks like human ccRCC. We are able to mimic a real human disease in its early stages,” Fu said. “This makes it a valuable preclinical model of human renal cell carcinoma.”

The TRACK mice immune systems also remain intact, unlike their xenograft counterparts. This allows scientists to get a more accurate look at the interplay between the tumor and the rest of the body – interactions that are providing increasingly important insights into how cancers become established and progress. It  also will enable researchers to test any immunotherapies that show promise for kidney cancer patients.

One drawback to the TRACK model is that the tumors remain at an early stage and the mice do not develop metastases.

“The hope is that we can create a more aggressive, metastatic ccRCC model,” Fu said.

The research was funded in part by Weill Cornell Medicine, the National Institutes of Health, the Turobiner Kidney Cancer Research Fund, the Weiss Family, and the Robert H. McCooey Genitourinary Oncology Research Fund.

Ongoing studies in the neoadjuvant setting for RCC