Home > News > Could a blood test predict how cancer spreads in children?

This is an excerpt of an interview with David Lyden, M.D., Ph.D., that appeared on News Medical.net. Read the full article here. 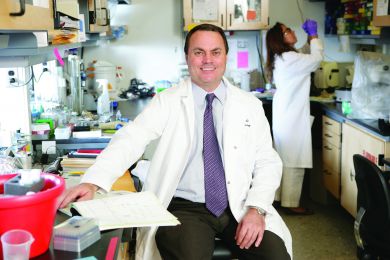 David Lyden, M.D., Ph.D. What methods are currently used to try to predict how cancer will spread in children and adults?

Traditionally, we use biopsies to try to predict how cancer spreads. There are a number of molecular markers that are used, but biopsy is a limited approach. Now, the current trend is to use liquid biopsy, which is basically a blood sample.

The characterization of these cells is being debated right now in terms of which markers can truly identify these cells and the fact that the cell number is still limited, irrespective of the marker used.

The second popular method that people are using right now is circulating DNA because they want to identify the particular tumor mutation. However, one problem with that is that we have a very high normal cell death rate in our bodies each day and there's DNA being brought into the circulation, even in people without cancer.

Our approach is a little bit different. We believe we have a better chance of representing the tumor and the metastatic status of the patient by examining tumor exosomes, which are nanoparticle, barrel-like structures.

The tumor releases billions of these exosomes into the circulation. We are faced with a challenge in that normal exosomes are also being released, in someone without cancer, mainly from the bone marrow cells. However, what we have found over the last 10 years in my laboratory, and what other people's groups have found, is that tumor exosomes are very distinct from normal exosomes.

We are also focused in the laboratory on examining the proteins and lipids and other labs are focusing on the microRNA. We're interested in identifying all the components that compose an exosome. An exosome is exactly like a virus; it has a double lipid bi-layer, it contains trans-membrane proteins that stick out of the exosome and it also contains packaged tumor DNA and RNA inside.

The proteins expressed on tumor exosomes can be in their thousands and they're very different from the few proteins that are packaged in normal exosomes. We want to improve our technology in isolating tumor exosome specifically, but, even if we don't, when you have a mix, it's clear that the tumor exosomes have distinct proteins and tumor DNA present inside them.

The Sohn Conference Foundation recently made a grant to researchers from Weill Cornell Medicine and Memorial Sloan Kettering Cancer Center (MSK) to develop a blood test to predict how cancer spreads in children. What impact would such a test have?

I think the Sohn Conference Foundation has focused on this discrepancy and recognized that more funding is needed for children with cancer and metastasis.

What is great about this blood test, which is a liquid biopsy, is that we can easily isolate the exosomes, which are located in the plasma. We perform several ultracentrifugation steps and once we have the exosomes, we can then analyze them for DNA, proteins, lipids and RNA.

The impact of this test is that once we isolate the tumor exosomes, they could help us right from the stage of diagnosis and throughout treatment. In all cases of cancer, including adults with cancer, we never know which patients are going to progress to metastatic diseases. We don't have good predictors of metastasis.

We feel with the exosome, that certain proteins such as integrins and certain mutations found in the DNA might be helpful for prognosis and tell us which patient will go on. They could also help in the tailoring of therapy. Even with traditional therapies such as chemotherapy, we can measure tumor exosomes and see if the patient is responding to that treatment. Our overall goal with the Sohn Conference Foundation is to identify new proteins that are highly expressed on tumor exosomes, but not in normal tissue, in order to reduce side effects.

Our goal is to develop new drugs and prevent tumor exosomes from binding to distant cells such as lung cells. The proteins on the exosome help with binding or adhesion, and the lipid component helps with fusion, so the tumor exosomes can get into normal lungs and cells, and create a micro environment that's pro-inflammatory that now is favorable for tumor cell binding. We call it a pre-metastatic niche: an environment that's now favorable for metastatic disease.

Furthermore, we are excited about the possibility of identifying the mutational status of a primary tumor. Our goal is to work with Dr. Michael Berger who runs a laboratory at Memorial Sloan Kettering Cancer Center (MSK) called IMPACT (Integrated Mutation Profiling of Actionable Cancer Targets), where they have a test that can tell you the number of mutations in a primary tumor sample - that's over 400 mutations. We want to know whether we can isolate the exosome DNA in the blood test and also identify the mutation; the test will help us confirm.

Now, there are new drugs that are actually specific in blocking the mutation. For example, there's the BRAF mutation and if we use a BRAF inhibitor we can now test the blood to see whether the exosomal DNA is no longer expressing that BRAF mutation. If that were the case, the patient would be responding to therapy.

If we then identify that there is BRAF mutation again in the exosome, that means the patient is now resistant to the therapy and another therapeutic approach should be used. We used to use traditional radiographic scans. Our goal is to identify those patients not responding to a therapy as early as possible, switch them to an improved therapy, and not wait for full blown metastatic disease and, say, a CT scan of the lung.

How will you identify biomarkers that predict future metastasis?

We can see those specific proteins that would help us with prognosis and treatment response. For instance, tumor integrins proteins or adhesion proteins are present on tumor exosomes, but they have limited expression on normal exosomes. If we saw these integrinss, that would indicate that there's tumor progression.

Also the family of integrins is made up of 24 members and certain integrins like to bind to different tissue sites such as the lung, liver, brain and bone. We can actually use those integrins to predict what the future sites of metastasis will be.

What impact will the support of the Sohn Conference Foundation have on your research?

There are very few, if any, grants dedicated to pediatric cancer. Their support alone will therefore have a huge impact. I think the greatest impact is that we'll be able to identify new drugs against specific mutations and against specific tumor proteins and lipids. These drugs will hopefully be specific to preventing exosomes from preparing metastatic sites.

Our goal is to have limited side effects. As you know, we use a lot of harsh therapies such as chemotherapy that are based on cell replication and division, but so many cells in our bodies are already dividing, so we have plenty of side effects with the traditional therapy.

Although children have an overall lower incidence of cancer, compared with adults, once children get metastasis, it is quite aggressive, with a short latency period. You must therefore do something right away or the child will die very soon of metastatic disease.

That's in contrast to many adult cancers, which have a slower rate of metastasis such as prostate cancer that spreads to the bone or colon cancer that spreads to the liver. Children's cancers are very aggressive with a very high metastatic potential. I think the impact our work will be that we'll learn a lot more about how to prevent and treat metastatic disease in the pediatric population. That information could also help adults with metastatic potential and metastatic disease.

What do you think the future holds for predicting how cancer spreads and what will this mean for patients?

As we go forward and understand more about the biological steps, we're seeing that learning about the metastatic steps is very different to just learning about primary tumor biology. As our work and the work of others has shown, tumors are secreting a lot of tumor secreted factors such as growth factors and our work also has emphasized tumor secreted particles. We have to understand that cancer is a systemic disease; it's not just focused on the primary tumor.

I'm excited that people, drug companies and different granting agencies are now paying more attention to metastasis, which causes death in 90% of cases. More emphasis is being placed on the immune system, how it can go and how it can be re-educated where it actually helps promote cancer. There are bad immune cells that can be targeted. There are cells in the tumor microenvironment, so there are the secreted factors. There are a number of components that can be targeted now by understanding the metastatic cascade. I think there is a promising future.