The CTSC has done more than fund Evi Giannakakou’s early investigations into how a blood test could be used to predict drug resistance in men with prostate cancer to better determine their care. It has also supported her efforts to help young scientists launch their careers. “The CTSC has been critical to the success of both of my main academic pursuits,” says Giannakakou, Ph.D., a professor of pharmacology and director of a program that helps earlycareer investigators apply for their first major grant. “It helped me and my collaborators collect preliminary data that allowed us to apply for larger federal opportunities, and got a much-needed program off the ground.” 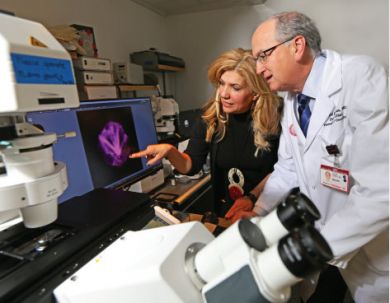 Evi Giannakakou, Ph.D. (left), and David Nanus, M.D. The research that the CTSC supported back in 2008 involves a collaboration between Giannakakou and David Nanus, M.D., the Mark W. Pasmantier Professor of Hematology and Oncology in Medicine and chief of hematology and medical oncology at NewYork-Presbyterian/ Weill Cornell Medical Center, as well as Brian Kirby, Ph.D., a professor of mechanical and aerospace engineering at Cornell Ithaca. The trio teamed up about a decade ago, when Kirby presented his work in microfluidics at a cross-campus symposium meant to spur collaborations. Soon after, Giannakakou and Nanus approached him to see if he’d be willing to design a device that could isolate circulating tumor cells in blood samples collected from men with prostate cancer. They explained that while the standard of care for prostate cancer patients was either chemotherapy or hormone-based therapies, there was no adequate way to determine which treatment would work for individual patients. Their hope was that by studying genetic markers from the circulating tumor cells, they could help clinicians customize therapies soon after their patients are diagnosed.

Kirby agreed to join forces, and today, blood-based liquid biopsies like the one Giannakakou and Nanus first proposed have had a huge benefit on the field. “This research allows you to obtain tumor information from the patient as often as you like, with a simple blood draw,” Giannakakou says. “In addition, while the information you receive from a traditional tissue biopsy is limited by the location from which the cells were removed, circulating tumor cells tell a more complete story about the entire progression of disease throughout the body.” Giannakakou is now using this approach to help explain why prostate cancer cells often become resistant to standard therapies over time, and along with Kirby has adapted the technology to ultimately study circulating tumor cells in cancers of the lung, breast, and gastric system.

Giannakakou is simultaneously doubling down on her mentorship efforts. In fall 2015, she started a program modeled after a Harvard CTSC initiative that prepares junior investigators to apply for the NIH’s oldest and most commonly used grant, the R01. The WCM CTSC sponsored the program and contributed $20,000 to get it off the ground, and Giannakakou notes that it has had a remarkable success rate—50 percent—in applications that have received federal funding. “The CTSC was critical to its success,” she says, “and I will forever be grateful for that.”

This story first appeared in Weill Cornell Medicine, Vol. 16. No. 1.

Getting a GRASP on the R01 Funding Process

Enzyme inhibitor looks promising against many forms of cancer