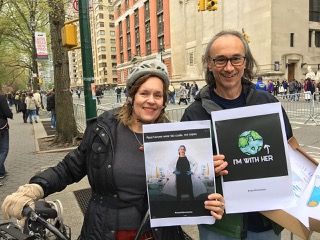 Lorraine Gudas and John Blenis at the NYC March for Science As an academic scientist who has also held political positions in federal science agencies, I know the risks of being viewed as "political" and the virtues of claiming “scientific objectivity.” So why am I joining thousands of my colleagues on the streets of New York on Saturday for the March for Science, an event that cannot escape accusations of political motivation?

The most important reason is a profound need to reassert public support for rational thought. Our country was founded on the principles of the Enlightenment, but it is now increasingly held hostage to evidence-free convictions that threaten our health, our security, our economy, our environment — indeed our very future as a species. That must end. Regardless of political affiliation, all of us concerned about the world's most urgent problems should reaffirm our respect for the methods that science offers for coping with those dangers.

Second, political activity need not be partisan. Some of my fellow scientists are reluctant to participate in the March because they claim that science should remain apolitical. But the scientific enterprise can never be removed from politics. It is sustained by decisions that our political leaders make about spending public funds, and government policies often depend on scientific findings. People can have different views about those decisions and policies without rejecting scientific principles and practices. There is no partisan basis to the process of science. What we know is equally true for Republicans and Democrats.

How we use what we know is a legitimate matter for political debate; that is not what brings us to the streets. But when our leaders ignore or show disdain for the traditional values of science, it is time for scientists and others who support science to speak out.

Finally, we scientists are also citizens. We should join with other concerned citizens in response to the dangers that a neglect of science poses for our future. America has thrived from the talented people who are attracted here from abroad to be trained; from the young Americans who hope to make discoveries that can inspire wonder or improve the human condition; from the funds that our state and national governments provide to support research and the institutions that house it; and from the thoughtful oversight of the scientific enterprise that all three branches of government and both political parties have provided.

By joining the March — physically in New York, symbolically globally — I will be one of many who remind everyone, here and abroad, that a healthy relationship between governments and the scientific enterprise needs encouragement in our fraught times.

Why Trump’s N.I.H. cuts should worry us

Is the cure for cancer real or rhetoric?

Strategies for an Era of Tighter Research Budgets

Has research lost its way?

Can cancer be stopped?

Varmus returns to his roots in cancer genetics

Taking the Next Step in a Storied Career