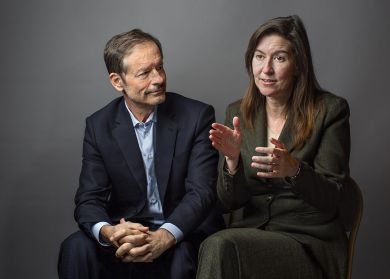 Lewis Cantley, Ph.D., and Kristy Richards, M.D., Ph.D. Two doctors – Lewis C. Cantley, M.S. ’73, Ph.D. ’75, and Kristy Richards ’90, Ph.D., M.D. – are growing radically collaborative research connections between Weill Cornell Medicine and the College of Veterinary Medicine, adding new discoveries to the university’s long history of research that benefits animals and people. They also are revamping the ways new generations of cancer drugs can be researched, tested and approved, which could dramatically shorten the timeline for new drug treatments and possibly save millions of lives.

In addition to collaboration in numerous areas across Cornell’s campuses, colleges and departments, Cantley and Richards are collaborating on the PATh (Progressive Assessment of Therapeutics) Program, a cross-campus, multispecies cancer research initiative to revolutionize treatment for humans and animals. They are tackling a challenge that cancer – in particular, lymphoma – poses to dogs and humans.

How does your collaboration work? How often do you sit down together in person, and how many other researchers are involved?

Richards: This is a really big endeavor. The part I help to coordinate is called PATh (the Progressive Assessment of Therapeutics program), and involves 30 or 40 principal investigators on the Weill Cornell Medicine side and probably another 20 to 30 on the Ithaca side. In October, we had a two-day meeting on the Ithaca campus, focused on lymphoma therapeutic development. Getting all of those people together in one place doesn’t happen that often, but within the cancer center, we’ve organized our cancer research into four programs, and those groups meet about once a month and simulcast the meetings to the Ithaca campus.

I spend roughly half of my time in Ithaca and half of my time at Weill Cornell … and it’s important, at least initially, to set up this kind of collaboration, because you really need to have feet on the ground there and here.

What were your initial goals of tying this cancer research initiative together across the campuses?

Cantley: Dr. Richards came to Cornell a couple of years ago [recruited by Dr. Ari Melnick, Weill Cornell Medicine professor of hematology and oncology], and I have been here four years now. We have been trying to integrate the vet school and the medical school with regard to how we do these preclinical studies so we can benefit both dogs and humans, from cross-knowledge and a precision medicine approach between those two fields. At the same time, we want to create better preclinical models, using explants [tissue taken from the human tumor] grown in mice. We realized that we could do this more efficiently in Ithaca than here in New York City. We are limited by space, which is very expensive here.

Richards: We have a whole building [the East Campus Research Facility], whereas at Weill Cornell, you would never see a whole building dedicated to animals. [In Ithaca] there is a lot of space for animal research.

What sort of speed increases are you seeing, or hoping to see, by developing multidrug combinations through research and treatment of dogs with lymphoma?

Cantley: I think you can cut five or more years out of the process of drug approval – this is a process that today still takes something like 15 to 20 years from concept to approval of a new cancer therapy. Tens of millions of lives could be saved by accelerating these trials through our approach.

Richards: And 10, 15, 20 years ago, we only had a few drugs that were targeted agents that we could even think about combining. Now we have hundreds of them to consider combining, and figuring out which ones to try in combination is a new research challenge.

The cost of making a new drug is estimated to be $2.6 billion. That’s for one new drug that gets FDA approved. A big contributor to that cost is the fact that most drugs fail after entering clinical trials, which are expensive to run. Obviously, that’s not sustainable. Because we know from precision medicine that this person needs this drug, this person needs that drug – we’re going to need hundreds of drugs. And we can’t wait 20 years for each one of them to be developed. So we need to get faster, and we need to get cheaper in our drug development. That’s why we created PATh.

You both are also collaborating with research groups and departments across Weill Cornell Medicine and the Ithaca campus on numerous other interdisciplinary fronts, all which hold additional promise, methods and possibilities for cancer research and drug development. How many years ago would even the idea of some of this research have seemed like science fiction?

Cantley: Six months ago! One of our brain cancer doctors, Howard Fine, is now taking skin biopsies from his glioblastoma patients, reprogramming the skin cells into stem cells, putting them into a broth and growing them into hundreds of little proto-brains. He then seeds a few cells from biopsies of their brain tumor onto each proto-brain and the tumors begin to invade the brain in a manner virtually identical to the in vivo growth of the tumor. A different drug or drug combination is then applied to each to determine a therapy that will kill the tumor cells without affecting the proto-brain. This is a totally revolutionary approach that could allow a unique therapy for each patient. If you had told me this two years ago, I wouldn’t have believed it possible.

Richards: The technology is changing so fast – that’s another good bridging between the campuses, because the campus in Ithaca has stellar chemistry, pharmacology and biomedical engineering research that speeds up the technology development. For example, we have a very strong collaboration developing organoid models to test new drugs – in particular, with Ankur Singh in mechanical and aerospace engineering. For the lymphoma organoids, his immunotherapy and cell engineering lab group built a high-throughput organoid maker, and it spits out organoids at hundreds per minute, which will really enable the high-throughput screening strategies we would like to use.

We’re all doing it together, all to a common purpose. And that’s Cornell’s strength; we’re so multidisciplinary and so diverse that when we attack the same problem from many different angles, our likelihood of success is dramatically improved.

Cantley: Another example of an interaction between Ithaca and NYC is the physical sciences oncology center. This center, recently funded by the National Cancer Institute, is a part of the Meyer Cancer Center and is a collaboration between scientists in Ithaca’s Meinig School of Biomedical Engineering and physicians and scientists at Weill Cornell. The focus is on triple-negative breast cancer – growing breast cancer organoids in specialized devices where we can monitor, visually as well as metabolically, everything that’s going on, so that we can understand in great detail how the cancer cells are growing and moving into new locations.

Do you consider your work together to be a “radical collaboration”?

Richards: That concept surely has been there since I came to Cornell as an undergraduate, and even long before I came to Cornell. Cornell’s strengths are all its multidisciplinary focusing … it’s right there in the “Any person … any study” motto. And so we’re bringing that to bear on cancer in this case.

Cantley: Cancer is an incredibly complicated disease, and we must use every conceivable approach to understand it and develop new “radical” approaches. In addition to the novel technologies available at the vet college and biomedical engineering, the Cornell Tech campus on Roosevelt Island, just now being built out, has the potential to provide even more opportunities for radical collaborations. We have vast needs for computing power and data storage space to analyze the genetic aberrations in cancers and correlate these with disease state and response to drugs.

What are the biggest challenges to your collaborative research?

Richards: Funding is always a challenge, but the funding environment these days is focused on multidisciplinary efforts, so I think that plays to our advantage. I think if you’re going to do a cross-campus collaboration or any kind of multidisciplinary collaboration, the challenge of effective communication is huge, and that goes along with the technology of communication – so working on better ways to communicate across campuses is helpful.

Cantley: The total amount of grant income that’s come in for cancer research between both campuses has gone up by a pretty significant factor, by two or three at least, in the last couple of years. And that’s at a time when NIH funding has been completely flat.

Richards: We’re getting a bigger piece of the pie.

Cantley: Some of this growth and support comes from hiring new people, and part of it has come from philanthropy that builds the infrastructure that allows us to create data – like the recent $2 million gift from Ellen and Gary Davis to support ongoing research in immunotherapy and to create a repository for patient tumor samples, genomic sequencing and bioinformatics.

What is most exciting for both of you in looking at the future of your fields?

Cantley: I don’t think there’s any other field in medicine that’s moving the way cancer is right now. Research is changing practice – just look at the technologies for targeted drug delivery, at nanomaterials being developed that can deliver bulks of drugs to specific locations, at immune and targeted therapies, at the explosion of recent progress in stimulating the body’s own immune system to attack cancer.

I think 10, 20, 30 years from now, we’ll still have a significant fraction of cancers that we cannot manage, but I think it’s not unrealistic to believe that just 10 years from now, cancer death rates will be reduced by 50 percent. That’s feasible.

Richards: We’re also having people live longer, better. So even if we can’t cure the disease, if you take a disease where a patient used to die within six months to a year, and now they can live for five years and not have toxicities associated with their therapy, that’s not as good as we’d like it to be, but that’s definitely better for the patient. Maybe they get to see their kids graduate from college or get married. And if you have that kind of improvement in a dog, they are going to die with their disease rather than from it.

The P.A.Th. to better models

Grant launches center on the physics of cancer metabolism