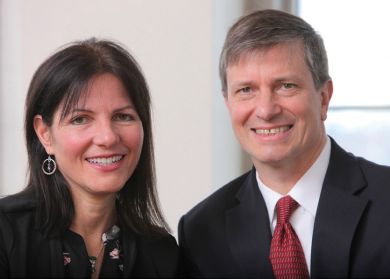 Drs. Holly Prigerson and Paul Maciejewski Photo credit: John Abbott Sociologist Dr. Holly Prigerson was an assistant professor at Yale in 1999 when she was summoned to the bedside of her father, whose pancreatic cancer had taken a turn for the worse. Even then, Dr. Prigerson — now the Irving Sherwood Wright Professor in Geriatrics at Weill Cornell Medicine and co-founding director of Weill Cornell Medicine's Center for Research on End-of-Life Care — was no stranger to the academic literature on death and dying.

A decade earlier she'd penned her doctoral dissertation at Stanford on a study seeking answers to the question, "If most older patients want to die comfortably at home, why are so many dying miserably in hospitals?" At the time of her father's illness, she was running two studies — one examining how to identify the signs and symptoms of maladaptive grief reactions and another examining the factors influencing the quality of life and care of advanced cancer patients and their closest family members. And yet like most Americans, Dr. Prigerson had spent very little time with people in their final days.

"This is what someone looks like when they're dying," she heard herself say at the sight of her delirious, jaundiced father. A nurse confirmed her impression. But when the oncologist arrived, he downplayed the situation. He asked her father — himself a physician — to extend his arms as though to stop traffic, and the older man's hands shook uncontrollably. Dr. Prigerson asked the point of the exam. As she recalls: "My dad didn't quite understand who I was; he said, as though I were a student, 'It's the flap test. If my hands shake, it means I have a lot of ammonia in my brain and I'm going to die soon.' " Indeed, he passed away shortly afterward.

The way Dr. Prigerson had registered her father's prognosis stuck with her, informing her work on new ways to assess how caregivers come to terms with a loved one's death — particularly from cancer, the focus of many of her investigations. A few years later, the American Journal of Geriatric Psychiatry published her Stressful Caregiving Adult Reactions to Experiences of Dying (SCARED) Scale, a tool for quantifying a caregiver's risk for major depressive disorder and quality-of-life impairments in response to their loved one's suffering. "At the time," she recalls, "research was a form of coping."

The work has implications far beyond Dr. Prigerson's own bereavement. The global rate of deaths from cancer — a diagnosis frequently associated with especially aggressive, and often expensive, end-of-life care and significant latitude for patients to participate in treatment decisions — is on the rise. A principal investigator on multiple National Institutes of Health-funded studies, Dr. Prigerson challenges conventional wisdom around cancer care and end-of-life issues, using rigorous study designs to help patients and their families make informed choices about their treatment options. Her research seeks to enhance understanding of patient prognoses to better comply with end-of-life desires and to facilitate healing after bereavement. She frequently collaborates with her husband, Dr. Paul Maciejewski, an assistant professor of biostatistics in radiology and in medicine and co-founding director of the Center for Research on End-of-Life Care. Says Dr. Prigerson: "We need psychosocial solutions to address what are fundamentally psychosocial problems in the delivery of cancer care to patients confronting death."

Drs. Prigerson and Maciejewski have taken a three-pronged approach, simultaneously studying caregivers, oncologists and patients. This summer, their paper in JAMA Oncology revealed that palliative chemotherapy — intended to extend survival and preserve quality of life for people with late-stage terminal cancer — achieved neither goal. A paper Dr. Prigerson published in the British Medical Journal in 2014 showed that patients who chose palliative chemotherapy were also less likely to die at home, more likely to die in an intensive care unit, and more likely to receive aggressive interventions — all outcomes contrary to what patients often prefer and associated with poorer adjustment by their surviving caregivers. A study currently under way at NewYork- Presbyterian/Weill Cornell Medical Center seeks to quantify how such an aggressive, ultimately futile approach affects caregivers. "There is no measurement of states worse than death," says Dr. Prigerson, who suspects that loved ones pay a high emotional price when people who sought to die at home end their days sedated and dependent on ventilators, feeding tubes, and other invasive technology.

A growing body of work by Drs. Prigerson, Maciejewski, and colleagues homes in on a condition known as "prolonged grief," a diagnosis they coined in a 2009 Public Library of Science Medicine report. Roughly 10 to 15 percent of people experience an extreme response after the death of a loved one, developing unique physiological and cognitive features that differ from major depressive disorder or the kind of classic grief that fades over time. The authors found that individuals with prolonged grief suffer greater disability and a heightened risk of suicide.

While the World Health Organization plans to include prolonged grief in its upcoming International Classification of Diseases, the authors of the latest edition of the Diagnostic and Statistical Manual of Mental Disorders (DSM-5) deemed it too controversial for inclusion. However, the DSM-5 makes a vital concession: they recognize the need for greater research attention on bereavement-related psychological distress — adding to the Appendix symptom criteria for a disorder they term "prolonged grief" and, thereby, clearing the way for prompt treatment. Dr. Maciejewski, a mechanical engineer by training and an expert in quantitative analysis, credits the progress to rigorous study design and data collection. "Without the technical work we've done that has made it possible to clearly identify prolonged grief disorder," he says, "I don't think the world would have come to the conclusion that there might be types of grief that aren't normal and require outside help."

In an ongoing project, the pair has developed a Grief Intensity Scale, a 12-question online survey to identify bereaved individuals at high risk for prolonged grief. They're also creating a free, online self-management tool to help people employ cognitive behavioral therapy techniques proven to reduce prolonged grief. Another study seeks to identify the features of hospice care that reduce a surviving caregiver's risk of depression, which is heightened by aggressive end-of-life treatment. "Social science has huge, untapped potential to improve the way healthcare is delivered," Dr. Prigerson says, "particularly when people are confronting life-threatening illness and death, which is such a psychologically loaded and threatening time.

This story first appeared in Weill Cornell Medicine, Vol. 15, No.1.

Most cancer patients have overly optimistic view of their life expectancy